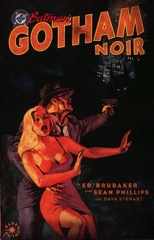 Gotham Noir is a Jim Gordon story. Only he’s ex-cop Jim Gordon, divorced ex-cop Jim Gordon, just trying to get by as a private investigator. Only he’s a drunk. It’s 1949 and Gordon had a bad time in the war. Bruce Wayne was there. Bruce Wayne knows the secrets. Lots of secrets in Gotham Noir. Writer Ed Brubaker has this endless drawer of revelations to throw in to explain why a character did or said something ten pages before. The Noir is heavy.

Some of the comic is Gordon narrating why he’s on the run from the cops. Corrupt politicians have pinned a murder on him, a murder he’s trying to solve. Because when a man’s partner gets killed… oh, wait, no, wrong story. Gordon’s trying to figure out what happened because he woke up from a bender next to a dead body. Though his motivations waver and do a 180 at some point in Noir. Brubaker likes threatening and victimizing to get a reaction in the book, which is really too bad. There’s a lot of gimmick–the Batman cast back in the late forties, complete with Selina “The Cat” Kyle and a guy named Napier who ends up the ill-advised, last minute supervillain.

And Harvey Dent’s around, of course. And some crime boss. And some dirty politicians. And who knows who else.

With Sean Phillips’s beautiful, post-war urban Americana noir art–ably colored by Dave Stewart–Noir shouldn’t be able to go off the rails. Unfortunately, Brubaker runs out of mystery a lot sooner than he should. He goes for sensationalism for impact, instead of ingenuity of solution. It’s not like Gotham Noir’s Jim Gordon is particularly smart. He’s not smart, he’s not charming, he’s just pitiable. Strange setup for a protagonist, which Brubaker enables by keeping the rest of the cast obtuse. They’re obtuse to Gordon, who recognizes it and doesn’t care, and to the reader, who probably should care because it’s supposed to be a mystery after all.

There are some similarities to Batman: Year One in terms of cast list and general plotting. And Phillips’s detailed, lush art… well, it doesn’t break the reminder.

But the problems with Gotham Noir aren’t from it cribbing Year One’s climax or Harvey Dent. The problems are with Brubaker’s handle on the whole thing. He sets it up to be interesting with Batman and then has to fall back on a Batman villain to make it interesting. Gordon’s a bystander in much of the story, which is fine for a hard-boiled p.i. story, but the other characters don’t make up for it. They’re boring. Selina The Cat’s a yawn fest–and the hinted love triangle (Bruce, Selina, and Gordon) never manifests into anything. Gotham Noir is a bunch of hints not manifesting into anything.

It’s got some good art and is wholly readable, but Batman: Gotham Noir is “just” another Elseworlds book.