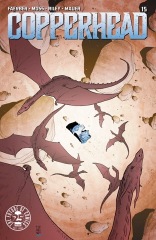 Copperhead is back after a little longer than expected, particularly since last issue had a big cliffhanger. The issue’s good–with Faerber comfortably moving from character to character, hinting at reveals, doing reveals. This new arc has Sheriff Bronson in trouble and everyone banding together to help her. For one reason or another.

She’s not in the issue much, which is probably the biggest surprise, even if Faerber tries to pretend the closing revelation is somehow a showstopper. It’s not, but he’s already done well enough he can go out on it.

Moss’s art is a tad loose. Overly agitated might be the best description. His lines are a tad erratic, hurried maybe. It does make the comic read more immediately, which turns out to be a drawback given Faerber’s soft cliffhanger.