Set before Lucy Weber joins Black Hammer, Sherlock Frankenstein and Legion of Evil has her investigating arch-villain Sherlock Frankenstein (think a mix of Sivana and Lex Luthor) in hopes of finding her father and the other heroes. Writer Jeff Lemire paces it well–he clearly loves writing Lucy Weber, the comic’s got first-person narration–and even the hinted revelations have a lot of weight. Though Frankenstein is probably incomprehensible if you haven’t kept up on Black Hammer. 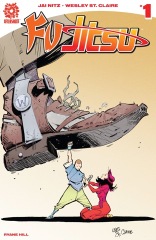 Despite graphic violence and very high stakes (the end of the world), Fu Jitsu is a delight. The comic opens with Fu in an isolation tank in Antarctica. He’s the world’s oldest boy, clocking in at a hundred and twenty or so years, and he’s trying to get over a girl.

Writer Jai Nitz opens the book with Fu deciding it’s time to come up and have a burger and get on with life. Good thing too, since his arch-enemy has sent James Dean (who apparently didn’t die but because a bad guy super-assassin) to kill Fu. The bad guy, Wadlow, has escaped from the future and only Fu can stop him.

Wadlow gets a great villain monologue (and a couple amusing sidekick thugs). Fu gets a little less backstory, which is fine. Nitz has a lot of fun on Wadlow’s exposition and artist Wesley St. Claire beautifully visualizes the flashbacks. St. Claire also does well with Fu’s training regiment, which includes some kind of yoga and very tasty hamburgers. There’s a nice bit of panel design and composition, but also a lot of movement.

Got to have movement with the kung fu. And there’s lots of kung fu.

Fu Jitsu is off and running.