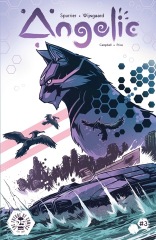 It’s not a great issue of Angelic. It’s an all right issue, but it’s kind of an action-packed bridging issue. Spurrier’s just setting things up for next time. There’s trouble brewing with the flying monkeys. The flying manatees are lying to Qora, the good flying monkey girl. There are weaponized cats, who aren’t friendly.

The action is paced quite well. Even though the issue isn’t a substantial read and Wijngaard mostly impresses just because he can keep up with the story, it’s got a good pace. You keep turning pages, expecting something significant to happen.

And it doesn’t. There are all sorts of hints at significant things, but they aren’t the same as substantial moments in the comic.

I was hoping Angelic would be smooth sailing after its bumpy start and solid second issue. It appears it’s going to be bumpy throughout though. 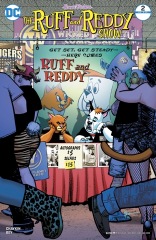 The second issue of Ruff & Reddy might as well be the first. By the time it’s over, the series is basically in at the point where it should’ve been at the end of the first issue. Or the beginning of this one.

Instead Chaykin plots out this long issue featuring Ruff and Reddy have to go to a pop culture con and sign autographs. They’re being hounded by the young agent but don’t really want to sign on the dotted line yet. They’re too proud.

Even though they’re sad and miserable. The comic goes on forever, without a lot of content. Rey’s digital art is fine, it’s just not at all interesting when all he’s visualizing is the anthropomorphic leads standing or sitting around alone and sad.

Maybe if Chaykin turns out to have a story in mind, the series will recover. From this issue, however, it doesn’t look like he’s got a story in mind at all. 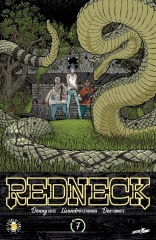 Redneck starts its second arc jumping eight months ahead from the previous issue. The family is in hiding. JV is on guard duty 24/7, Bartlett is on punishment (of sorts), Perry is cheating at cards. New vampire Landry is learning the ropes but still not particularly welcome.

There’s a lot of exposition in the comic. Lots of vampire information. Not a lot of personality though. Bartlett narrates but without having anything to do in the comic, except chastise Perry once and pal around with Landry.

It’d probably be more engaging if Estherren’s art weren’t all of a sudden kind of lazy. His style hasn’t changed, he’s just not keeping the energy up with some of it. But he’s still great on other stuff. It’s uneven in a way he’s never exhibited before.

In just six issues, Redneck has gone from being exciting to not to exciting again to not again. This arc is off to a not exciting start. 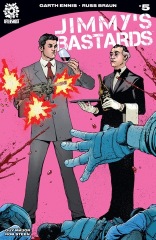 And there you have it, don’t count Ennis out, not even on Jimmy’s Bastards.

It’s been a rocky series and this issue’s probably just another peak, but it’s a good peak. It’s beautifully paced, it’s funny, it’s dry. The Britishness comes through.

But what does a good issue of Jimmy’s Bastards mean? It doesn’t mean the comic’s saved. It’s been too rocky. When Ennis is on for a series, he tends to be on for it. At least by issue five. Bastards is an ongoing, which is concerning enough for Ennis these days, but one without a clear point? Well, it’s hard to get invested in the comic again. Beyond reading it, enjoying it, appreciating it. Anticipating it is out.

Good art as always from Braun, including a great double-page spread of Nancy’s skydive landing. The book’s fine, with some standout issues, it’s just not consistent. 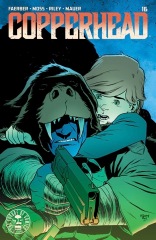 One of the most frustrating things about Copperhead is how effective it can be. This issue ends with one heck of a standoff and it’s kind of cheap, but it isn’t because Faerber has done so much work on the characters and their relationships it can’t be cheap.

This issue has the secret origins of Sheriff Clara. It’s also got some revelations about Zeke and Zeke’s dad. The B plot is the good guys trying to track Clara down. The B plot is where Faerber gets in all that Copperhead texture. Where it’s serious even though all the aliens are cute.

Moss’s art gets real hurried and real thin by the end of this issue. The scenes aren’t complicated. They’re just rushed. It starts early too. By the end of the book, it’s looking rough. Hopefully the art turns around. The writing can carry it but it’d be nice if it didn’t have to do so. Moss lets the expressions go and Copperhead needs its expressions. 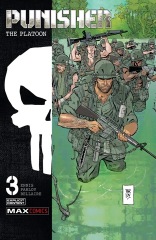 The comic itself is phenomenal. Ennis’s dialogue, his narration, the plotting, it’s all great. Parlov’s art’s great, but playing more for… humor. There’s some absurdity of war stuff going on and Ennis tries to find the humanity in the characters’ reactions to it. He also nicely echoes sentiments from the past to the future with the modern day framing stuff. It feels very whole.

But it’s strange. It’s not really a bridging issue, not unless everything hinges on Frank going to the black market for better rifles. It seems like an aside. A texture issue in a limited series. Does Ennis have time to do it?

Of course he does. Because it’s Ennis and Punisher. He never lets Frank down. 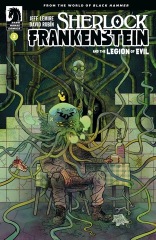 In searching for her father, Lucy Weber meets Cthu-Lou II. He’s a sewer varient of Cthulhu’s chosen emissary on Earth and he’s not interested. He fights with his wife, who’s got a husband with an octopus head and no interest in super-villainy. They’ve got a sweet daughter, also with octupus head, but in a cute way. It’s just this sad story for Weber to encounter. There are clues too, but it’s really just this sad family.

Lemire couldn’t do it without Rubín though. Not at all. Rubín uses comic strip pacing for some of the issue, which makes the mundane hilarious and the terrifying genial. The expressive faces–it’s a talking heads issue–are wonderful.

It’s a fantastic comic. Lemire and Rubín each do great stuff here. 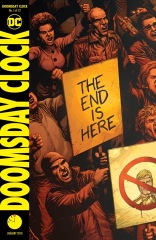 There’s one big problem with Doomsday Clock. It exists.

And a lot of it is worse than one might expect. Apparently, in 1992, after the plan at the end of Watchmen didn’t work out, the United States elected Robert Redford president. Only he isn’t a hippie dippy Robert Redford, he’s President Trump. There’s even a wall.

So, you know, if you want to read Doomsday Clock to make fun of Geoff Johns’s writing… it provides a lot of opportunity. Is it worth reading for that reason? Depends on whether or not you want a lot of fodder for mocking Geoff Johns.

Or maybe you just want to see Gary Frank “Gary Frank” a Watchmen sequel. Only one where the DC Universe gets involved. And that crossover–albeit to a different, somewhat darker DCU (I think, has DC changed Superman’s origin lately)–gets to have the Watchmen panel layout.

You think Frank and Johns weren’t going to ape Watchmen down to the panel layouts. Please. Doomsday Clock is craven and desperate.

It also seems to be implying, after Watchmen, Nite Owl feels so shitty about Rorschach dying he takes up the mask, as it were, and lives his life aping him. Or something. It’s dumb. It’s a Watchmen sequel written by Geoff Johns. Of course it’s dumb.

It’s kind of sad how dumb it gets. Especially when Johns brings in some costumed villain sidekicks for NuRorschach. They’re terrible enough maybe they were in Before Watchmen. But I’ve blocked that previous desperate attempt from DC to turn Watchmen into a brand name from my memory.

I finished Before Watchmen though. I’m not sure I really want to see what Johns and Frank have cooked up for them in After Watchmen.

I do want to know if the team refers to themselves as The Watchmen though. I really, really hope they do. If you’re going to show the world you’re an exceptionally pedestrian writer, you might as well do it on a corporate Watchmen sequel.

Is Doomsday Clock worth the read to intellectually dissect it and roast it? For five dollars? In this economy?