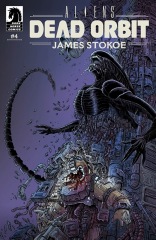 It’s about Aliens after all, and the Alien action is phenomenal. Stokoe’s pacing is wondrous. He doesn’t do all the Stokoe detail on Orbit, he’s more concentrated on movement and the threat of the aliens.

The issue’s a short “read,” but a longer visual experience. The Stokoe art is just so good, the eyes have to linger, even when the pace is amped.