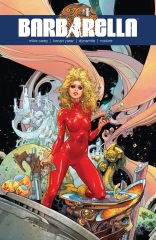 No doubt I’m going to regret it, but I’m excited about Barbarella. There’s whatever baggage comes with having an old white guy (Mike Carey) write a bisexual future woman and it’s definitely there. Carey doesn’t have any conversations, he just acknowledges conversations to be had. Only without ever promising they’ll be had. Again, I’m going to regret being excited about this book.

Kenan Yarar implies a lot more detail than he actually draws. He’s got a rough style and a great sense of movement. It’s important because eventually Carey starts doing summary and Yarar is able to fill those montage panels with a nature momentum.

It makes for a compelling read. I’m looking forward to the next issue, which is kind of embarrassing because Barbarella is kind of a cop-out. It’s an excellently executed comic, but it’s aimed at the broadest audience Dynamite can get away with on a book with nudity and sex.

And Yarar’s rough and immediate style actually give Barbarella all its grit.

Honestly, it feels like a Dark Horse comic from the mid-nineties.

One I’m hesitantly onboard with, because I can’t believe Dynamite is intentionally doing this book this (good) way.