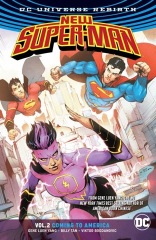 Coming to America collects six issues of New Super-Man. Three different two-parters. Coming to America is the middle one. No idea why they’d have picked it other than Eddie Murphy movie. It’s not the best of the two-parters. Might be the worst. Certainly does have the worst faces. Billy Tan pencils most of the issues, first and third arcs. Regular artist Viktor Bogdanovic does America and it’s lazy faces. No one has any personality in those issues. The expressions aren’t as bad as the lack of detail, but they’re not good. They made me–shudder–miss Tan (thinking he was Bogdanovic because I didn’t want New Super-Man to have art problems).

The middle story is also heavy on DC Rebirth continuity, which is a terribly mean thing to do. I want to avoid that nonsense like the plague. So having Lex and Superman Rebirth guest star doesn’t really do much for the comic. It’s kind of filler, just because writer Gene Luen Yang true desire seems to be introducing the New, Chinese Flash. And also because the relationship between Superman Rebirth and New Super-Man? There’s nothing special about it. It has no personality coming from either of them. Superman Rebirth is patient as Christ, New Super-Man is awestruck. Yawn.

But that brand crossover aside, everything else in Coming to America is a success for Yang. He doesn’t just build New Super-Man–Kenan–he also builds the other members of the JL China. Bat-Man and Wonder-Woman. They get this great arc together involving Bat-Man’s little sister and a nemesis. Excellent stuff. Yang seems to do better in pairs–Bat-Man and Wonder-Woman, then New Super-Man and New Flash.

The finale, which ends–quite frustratingly for a collection–on a big cliffhanger, has New Super-Man Zero returning. He’s the first attempt at a Chinese Super-Man and he’s far more powerful than Kenan. The real overarching story of this collection isn’t the Lex Luthor-funded trip to Metropolis, but Kenan’s relationship with his new mentor as he tries to unlock his superpowers. He’s got all the Superman powers, he just has a blocked qi. Once he’s able to unblock and properly channel his qi, Kenan gets some of the regular powers.

It seems like way too much of a plot device–which the artists integrate into the panels too, showing actual qi meters–but it always works out. Despite his obtuse arrogance, Kenan’s a great protagonist. His heart’s never too far away from the right place and the supporting cast ably brings him around.

Hopefully the art issues get resolved. Someone needs to tell Bogdanovic to slow down and take his time. Because, as distinct as Bogdanovic can be, the mood can be easily duplicated. Tan easily takes over the visuals on the comic. He’s more balanced than Bogdanovic, even if he’s bland. He’s consistent. Consistency is important.

Yang’s got a good pace throughout, he’s got a fantastic attention to character detail, he writes good action scenes. New Super-Man has it all.