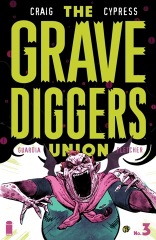 Gravediggers continues on a nice pace. It’s a suspense comic (so hopefully a limited, or at least with definite arcs) and Craig’s better at building that suspense than anything else. The pacing of the reveals this issue, as he toggles between the Union tangling with a vampire and Black Temple Prophet (and former junior gravedigger) Morgan has a trippy experience getting ready for a presentation.

Great art by Cypress. As always. Though he gets less to do with the Union than Morgan. She goes all over the place, this universe and beyond. The Union goes into a haunted house. From a haunted graveyard. Or some such thing. Morgan’s storyline opens the book up a lot, because Craig isn’t really a comedy writer. He couldn’t keep it going with just the Union.

So another good issue of Gravediggers Union. Craig’s got the momentum on the book now, Cypress is always able to carry it. It’s in its stride.