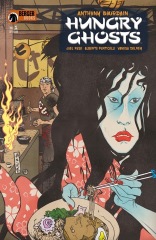 Hungry Ghosts is the story of restaurant staff who get suckered into telling ghost stories with one of their hideous rich customers. The hook of the series, presumably, is “executive producer” Anthony Bourdain. He’s credited as co-story but–from the back matter–it’s clear Joel Rose, the other story credit, did the writing work.

Though, presumably Bourdain agrees most of his customers are hideous rich people.

Alberto Ponticelli and Vanesa Del Rey do the interior art. Ponticelli does the setup and the first story, Del Rey does the second story. It’s the one about the pirate ship rescuing a drowning woman just so they can rape her. It doesn’t go as planned. It’s not scary though. None of Hungry Ghosts is scary or even disturbing. It’s PG–13, conceptually as well as visually.

The first story has a cook not feeding a homeless guy and the homeless guy turning into a demon to exact retribution. So, maybe if you bring a copy of Hungry Ghosts #1 to a Bourdain restaurant you get a free meal? Because the story literally says not feeding the hungry deserves death.

So. I guess the comic is for people who just love anything with Anthony Bourdain’s name on it? Because there’s nothing else to it. Sure, it’s updating Japanese “Kaidan” but so are a lot of things. Even some actual scary things, which Ghosts isn’t.