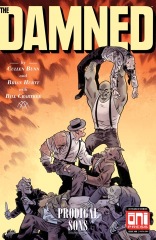 I’d forgotten how Damned: Prodigal Sons ended. Now it makes sense why it’s included–it was a setup for another series. But it didn’t happen back then.

So in the context of setting up what’s to come in Damned? Sure. It’s a fine arc. Kind of deserved two more issues, as it’s clear Bunn needs the five. I don’t even think the original Damned was five.

Sons works as an arc in an ongoing. It’s still got a lot of problems. But for the finale, the biggest problem is it’s rushed. Bunn needed to spend time with these new characters. A page here or there.

Anyway. Can’t wait for #9 and the return of the new.