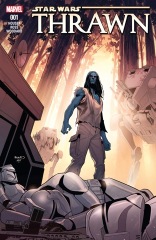 Even through Thrawn gets a fair number of close-ups in Thrawn #1, I finished the issue feeling like he didn’t. Thrawn is a Star Wars comic–one of the new official ones so all those old official ones from Dark Horse starring Thrawn are out of continuity. Though, since they’re all based on Timothy Zahn novels, there’s got to be crossover.

This issue deals with how blue super-intelligent alien Thrawn gets into the Imperial Academy. There’s even a cameo by the Emperor (which is maybe the comic’s only draggy scene). Otherwise, it just moves and moves.

Some of the brevity is thanks to the narrator. It’s not Thrawn, but some Imperial cadet who gets stuck translating and babysitting him. The cadet’s not a jerk, but he’s completely disinterested in his assignment. Writer Jody Houser uses the cadet as the reader’s vantage point, but the cadet’s got more information than he’s sharing in narration. Got to keep it dramatically compelling.

And Houser and artist Luke Ross are able to keep it compelling. Even when the comic hits a second or fourth talking heads sequence. There’s sporadic action, but most of it is just seeing how Thrawn reacts to this new world around him. There’s Star Wars minutiae but the better, not-created-by-George-Lucas minutiae (i.e. the Galactic language being called Basic–it’s immediately self-explanatory).