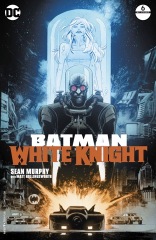 The issue starts a humdrum cops chasing Batman, with lots of fast scenes of the cops (including Nightwing, Batgirl, and the Joker) coming up with ideas and then cuts to the Batmobile. It’s a little obvious, a little tedious. The action pacing isn’t right.

Sigh. It’s like if DC had validated the movie fans when I was eleven.

Then there’s a weak fight scene between the Joker and Batman. Batgirl goes to Mr. Freeze and finds out Papa Wayne was just a secret agent who brought Nazis to the States for science. He’s morally bankrupt but not a Nazi. Mr. Freeze, however, isn’t morally bankrupt–he hated his father, who–retcon alert–hated Freeze’s Jewish wife, Nora. It’s an okay scene though, even if dreadfully cheap. Murphy should just do a Batgirl series.

The end has what ought to be an amazing Joker sequence but flops. Brian Bolland’s safe for now. The problem? Murphy runs out of space. He’s been too busy with his action movie back-and-forth exposition dumping again.

Still. Burton Batmobile alone makes it worth it. For an exceptionally select number of readers.