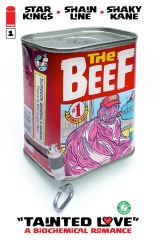 Honestly, is there time for The Beef? Shaky Kane’s art is all right, but it’s far from enough to hold up the rest of the book. It’s a middling indie book, juxtaposing this guy’s life with beef (his father worked at a slaughterhouse, he works at a slaughterhouse, everyone eats the slaughterhouse’s burgers in town) and his bad experiences with his bullies.

The bullies get more to do than the lead, because when it’s all the metaphysical exploration of man and beef, it’s nothing about the character specifically. He’s just there. So he can turn into The Beef, presumably. The Beef looks like the Hulk without any skin, just muscles. According to the cover and the single appearance on the last page.

Not sure if what the Beef is going to do to warrant a five issue comic book.

Richard Starking and Tyler Shainline’s script pretends being loose is the same thing as being nimble. The narration is overwrought, which is out of sync with Kane’s art. Of course, Kane drawing grown-up rich kid redneck gangsta bullies is pretty out of stylistic sense.

It’s kind of exhausting. And it’s only the first issue. The Beef is nowhere near as filling as its creators pretend.