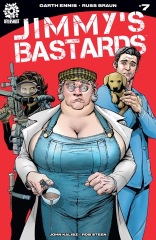 Jimmy’s Bastards ran the risk of going on too long, with Ennis running out of story in the first arc. If it’s an arc. The first six issues. But with issue #7 he seems to have things moving again. Jimmy’s back in the game, albeit slowly, as he’s got to deal with the institutionalization thing.

And Nancy gets a bunch to do on her own.

Still way too much with the offspring, who aren’t anywhere near as diverting as the amount of pages Ennis dedicates to them suggests. Everything with the kids feels like filler, until there’s action, then it’s at least that awesome Braun action.

The book’s not spectacular or anything (and never–or rarely–has been to this point), but it’s certainly in better shape than I thought it’d be at this point. Ennis does have a continuation in mind; I’d just assumed he was dragging things out.

At least he’s got Braun on the art. Braun makes up for a lot.