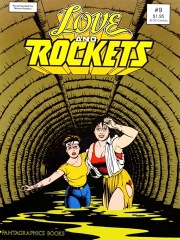 Jaime opens Mechanics this issue with an eight-panel retelling of the story so far. At least the most relevant parts. They’re little panels too. Top half of the page. It’s beautifully done.

Turns out the flashback panels are Race’s thoughts as he’s recovering. He’s survived the blast, no one knows about Maggie and Rena Titañon. The story–ten pages this time–is split between the rest of the cast (Hopey, Penny, Race) and Maggie and Rena. They’re in the sewers, trying to get out to sea. It lets Jaime do a lot of work with black. He’s been doing big panels with a lot of silhouettes and shadows lately, but here he gets to do almost a whole strip of them.

Plus there’s a tie-in to Rocky and Fumble. Maggie and Rena use a Fumble-head as a flashlight. First official crossover, I think. Derek Cinema gets mentioned in Mechanics and one of Mario’s strips, but a Fumble-head is the first visual crossover.

Then Beto’s got the Palomar conclusion. He makes it sad, funny, dangerous, funny, and sad. And then sweet, while still being sad. The (now grown) boys head into the hills to find their missing pal, who’s run off after attacking his wife and child. There’s character development in two flashbacks–Beto does for comedy in both, but differently. The first time it’s a funny flashback. The second time it’s this concerning foreshadowing, played for visual humor.

The story of Jesús–the missing guy–has two nice bookends. Then Beto postscripts with Carmen and Heraclio. Now, Carmen still hasn’t gotten a full story to herself, but in the one page–she doesn’t appear in the rest of this chapter–she becomes the emphasis of the whole thing. The action just leads to Carmen’s reaction to it all.

It’s nice, but it’d be nicer for her to have her own story one of these issues. Beto’s only established her as Mrs. Heraclio. She’s got personality but nothing going on.

Then it’s a Rocky and Fumble, where Rocky runs away. She and Fumble do it up Mark Twain style, on the river. This strip started in space–like a “Jetsons” thing–and it’s just gotten more and more grounded. The strip’s full of humor and emotion. Growing pains emotion for Rocky and her parents, which she can’t really verbalize and they don’t want to verbalize.

And Jaime’s art is beautiful. Again he’s playing with the blacks, so much of it is silhouette. Some rather neat composition too. Even planet-bound, Jaime enjoys doing the comedic action with Rocky and Fumble.