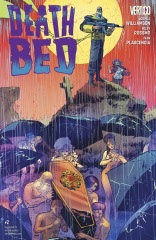 Deathbed still has pacing issues. Williamson does a lot better without exposition on the girl. The first issue pretended she was the protagonist. This issue reveals she’s the sidekick. She’s a good sidekick, but just the sidekick.

And it’s not even because the lead guy–Luna (the aged but still virile adventurer–seriously, how long has it been since Tom Strong established the old man adventurer in comics); anyway, its not because the lead guy gets more to do. He obviously does, because there’s a big fight at a funeral. Artist Rossmo’s comedy chops exceed his action. The action is good. A little busy but good. The comedy is great.

The comedy art will need to be great because Deathbed isn’t just about Luna and his biographer having adventures. It’s about Luna growing as a person. Williamson writes Luna the grower better than Luna the shower. Oh, sorry, I must still be thinking about how fixated Deathbed is at showing Luna nude. It might be funny if the biographer cared but she doesn’t. Instead it’s weird. Is it a machismo thing?

It does still read too fast.