All of a sudden, Thrawn is about Thrawn again. The issue covers a few years, sometimes emphasizing some of Thrawn’s achievements, sometimes just hopping ahead. It’s just really nice to have Thrawn and sidekick Vanto back. They’re so fun together.

There’s also the analytical stuff, which is what makes Thrawn engaging. Not the action or intrigue–the issue even determines Thrawn’s no good for intrigue–but the plotting and the contemplation. Well, the contemplation when Thrawn gets to quiz Vanto about it.

It’s such a nice return to form, it barely matters the issue doesn’t really go anywhere, just does a bunch of summary to set up the next issue. It’d be even nicer if writer Houser had employed a similar tactic on the previous issue, which lost its leads to world build. 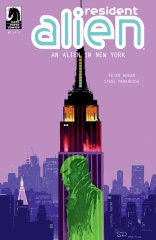 This issue of Resident Alien, which actually has Harry getting to New York City and being overwhelmed, is somehow entirely understated. A comic about being overwhelmed keeps it calm, always. Harry brings his friend–and love interest’s father–along with him for initially moral support then protection (it’s not safe for an alien); the friend, Dan, gives Hogan a good perspective on Harry for the reader.

Plus Dan and Harry are cute together.

Meanwhile, an unwelcome guest doctor shows up to take over Harry’s practice for his vacation. Either it’s going to be a subplot for Alien in New York or it’ll be something for the next series. Hogan’s plotting for these books is so chill, it’s hard to guess.

As for Harry’s New York Mystery? Next issue might be some answers. This issue just raises more questions.