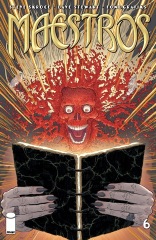 Two big surprises this issue. Not counting the little, almost expected double-crosses. No one is particularly nice in Maestros. Except Willy, his mom, and his girlfriend. The Devil’s daughter isn’t so bad either.

It’s the end of the universe, with Willy battling it out with the magical elf for the control of not just the universe, but creation itself. Lots and lots of magical action, all beautifully realized by Skroce. It’s a shame he couldn’t do more of the battle scenes, which are awesome when they’re the wizards, but even better when they’re the hordes. Maestros has such great design on its hordes.

The surprises both come at the end. First, it turns out this issue, #6, is the penultimate issue. Skroce’s had a very successful book to this point and all he’s got to do with the finale is wrap it together for a trade. He ought to be able to do it, based on how well he paces out the action and twists in this one.

Because there’s a big cliffhanger, brought on by the other big twist.

Maestros has been one hell of a book. Skroce’s done some excellent work.