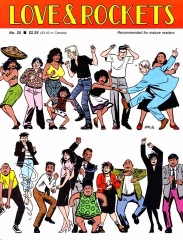 It’s a Heraclio story. And it’s good. It’s dense. It’s Heraclio’s history of Palomar, basically covering everything occuring in Beto’s Palomar stories since Love and Rockets started, but it’s not Carmen’s story. She’s the subject of it–Heraclio relates his love for Carmen. He thought she was a funny little tween in the first Palomar two-parter, just like everyone else, but she was the protagonist and narrator of that story. Since then Beto’s pulled way back and changed the angle on the stories. Even though occasionally it seems like she still might be the narrator, just more removed.

So it’s dense. Like twelve panels on most pages, starting with Heraclio moving to town and then retelling everything from his perspective. It’s pretty much as expected, since Beto hasn’t ignored Heraclio stories in the new Palomar time frame, but there are some surprises. Like why Israel is really staying away from Palomar and Heraclio having a history of getting shit-faced and bothering Luba about her deflowering him as a teenager. But nothing about how maybe one of her kids is his. It’s all in summary and even with some great expressive art, which implies a lot about Carmen’s present-day antics, she’s still a mystery. There’s one word balloon in the story and it’s not her’s. It’s not even Heraclio’s.

It’s a lovely, successful story. It’s just not a Carmen story. Arguably it isn’t even a Heraclio story. It’s the story of Palomar from Heraclio’s perspective. Beto’s narrative summarizing work on it is phenomenal. And the art is precise and precious. Not a lot of room with twelve panels a page; his composition is always just right.

That story is actually the second in the issue. It’s just, you know, I’ve been waiting for it for fifteen issues.

Anyway. The first story is Jaime’s. It’s a Locas, about Maggie without Hopey. Not just not living with Hopey, but after Hopey and her band has gone on tour. Jaime introduces a lot of new characters while cementing the new supporting cast (basically, bye, Penny). Maggie’s mom makes an appearance as does a younger sister, Esther. Speedy’s back, but only for long enough to foreshadow some trouble ahead with Esther and him.

Izzy smiles. It’s kind of trippy. Daffy’s back for a page or two and it seems like Doyle’s going to be big in the supporting cast. Or at least he’s going to be around more.

Maggie spends the day with Danita, who she worked with before both girls quit their jobs. They bond, with Maggie sort of giving Danita a tour of she and Hopey’s regular stomping grounds. And Danita asks about Maggie and Hopey, which leads to some real talk from Maggie.

Jaime juxtaposes in flashbacks, visually toggling between past and present, with some relationship development. Hopey’s not in the present but she’s always present.

Of course, the whole thing is about Ray Dominguez coming back to town. Maggie liked him in high school. He knows Doyle, he knows Maggie’s family, he’s in the flashback. It’s an interesting introduction because Ray gets thought balloons, something the supporting cast usually doesn’t get in Locas. If ever.

It’s an excellent story, lots of great art, beautiful pacing from Jaime on the story. Some great scenes and tough moments as Maggie settles into her new normal. Beto’s got the Heartbreak Soup label for his Palomar stories, but Locas this issue reverberates with Maggie’s missing Hopey. It’s great.