Beto gets two stories, Jaime gets two stories. Beto’s are installments of Love and Rockets (the surprisingly penultimate one) and Poison River (part ten, but apparently not penultimate). Jaime’s got two Wigwam Bam entries–parts six and seven.

There’s some funny stuff in Jaime’s entries. Not to mention Izzy and Hopey reuniting. But Beto’s got two phenomenal stories. And they’re really short. Love and Rockets is nine panels a page, six pages. Eighth part of Love and Rockets and it’s still unclear who’s going to get a focus. Maricela makes sense; the story has become about her and Riri over the installments. And other characters have fallen off. Or been shipped off to Palomar for safe keeping. But Beto’s got a story with the skinheads. They haven’t gotten a lot of attention–kind of ever–but their story is the framework everything else in Rockets plays off. Even though those characters don’t participate in as many story threads as the other ones.

Beto’s done an unpretentious character intersection thing set in Los Angeles and Hollywood. And he’s never drawn attention to it. Even when Love and Rockets has seemed a little too slight or a little too much (the band), Beto’s never let it get out of control–he’s always been able to keep it on the path to get it to this conclusion.

It’s not a particularly flashy story–even with the surprising title–but Love and Rockets really does show off Beto’s writing skill.

So does Poison River this issue, but it’s always been the flashier of the two stories. It’s a ten page crime story. Luba’s sort of just been a red herring. It’s all about her husband, Peter, and his father and the various criminals they’ve interacted with over the years. The end of the entry returns focus to Luba, but Beto took it away from her for a lot of this story. And apparently it’s not over next issue, so maybe he’ll have a chance to tie it all together?

It seems possible. Though more from what he’s done in Rockets than River. River has excellent sections, but the connective tissue is sometimes tenuous. Rockets isn’t sections–with one exception–just connective tissue laid out linearly.

Jaime’s Wigwam Bam chapters aren’t anywhere near as ambitious as Beto’s entries. Even when Jaime goes for something a little more–a regular cast member’s grand exit–it doesn’t really come off. It kind of comes off, but it’s not a main cast member. No matter how hard Jaime has tried to make them one for more than a dozen issues.

Meanwhile, Hopey has a weird encounter with a famous female comedian. It’s really funny stuff and Jaime’s comic timing is great, but it’s kind of just Hopey mugging for the… page. Juxtaposed with Hoppers and Hopey is Izzy heading east and visiting various people. What’s must upsetting about Wigwam Bam this issue is how well the second installment opens only for Jaime to run away from all of it. He’s avoiding scenes again.

Though Rocky and Fumble have parts, with Rocky now a friend of Danita and Fumble on her bed. It’s cute, but also during Jaime’s apparent abandoning of Danita as a character. She’s not the one who leaves, she’s just utterly reduced. It’s weird.

So while the Wigwam Bam stories are effective, sometimes it’s Jaime trying to be effective. The Hopey and Izzy stuff is excellent, but it’s measured and precise and deliberate. Jaime’s avoiding again, like I said. He hasn’t lost his mojo. He’s just figured out how to do his mojo.

Meanwhile Beto’s seemingly effortlessly turned his “play” story Rockets into something amazing and rescued Poison River (once again) from its troubles. 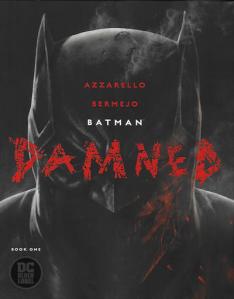 Ok then. The arrival in DC’s new line of “mature” titles featuring their biggest characters starts with an expressionistic take on the dark, forbidden knowledge portion of the Batman mythos. Not that it’s a new idea, Bats has been something various writers have stretched as far as editorial will let them after what, 75(?) years of Batman stories. Where do you go from there? In it’s quest to reinvent itself for a new generation and relevance in today’s pop culture, DC has decided a more original, adult approach is supposedly an idea whose time has come.

After reading the story, which features a trio of DC mystical characters that cameo in Bats attempt to help with the books plot, facing an unknown part of his life, that provide the impetus here. Sadly, not much is really new or different. Lots of overly used metaphors abound, along with John Constantine’s new and annoying, mysterious
narrative dialogue that pretty much abandons his former accent and smart ass attitude.

Lee Bermejo’s art, while technically accomplished, seems odd in places, perhaps with a tad too much realism to get the viewer fully engaged, being more distracting than complimentary. The Elseworlds approach used to always display to the reader this was a different type of story, not necessarily bound to the established canon with the characters. This quite often was a successful approach, with an inner sense of logic that would satisfy, and got you from point a to b in a satisfying manner.

Not that there isn’t craft of some sort operating here. It’s just that it’s not particularly original or well serviced, with a slightly askew dc universe different from the others just because it can be. All the characters seem off, not really themselves, and by not knowing a purpose for this interpretation, keeps me at a distance to care. I’m not sure where the story aims after 48 pages, and other than an interesting take on Zatanna, I’ve still got nothing invested after reading it. Murky stories and hyper realistic art aren’t a substitute here for a story I can get enthusiastic about, or even keeping me curious enough to want to read the second issue.

Then there’s the “mature” part of the story, really the only “mature” part of it, and it doesn’t add to the proceedings at all. To give this new “Black Label” an edgy, adult look and feel, we’re forced to see Batman’s full frontal junk in three shots (that I can tell, anyway), that seem ridiculously gratuitous in their inclusion. I didn’t know Bruce walked around the Batcave naked, and not sure I needed to.

Why this even exists in a Batman story is totally beyond me. I’m not a puritan, and if you gave me a valid reason to see Batman’s John Thomas I’m sure I’d go along with it. Sadly, this isn’t it. The only reason I can guess is that it gives you a reason this week to buy the new Batman comic.

Adding fuel to the fire, the week the book came out, that’s really all folks could talk about, simply because it was the only thing that made this Batman comic different from the rest. Not better or even equal, just different. The cheesy mechanization that led to this editorial decision for attention and sales elude me, and it seems this just creates more questions and problems going forward.

This brings up imaginary scenarios of my former life as a comic book retailer, where more than once I’d be confronted by a parent whose child reads Batman and wonders why this comic wasn’t out on the racks for little Joey to peruse. Following would be me demonstrating the graphic content, with the inevitable hopeless defense of why they’d make Batman inaccessible to anyone under 21 in the first place.

After all, once you get to see Batman’s junk, what’s next? Selina’s stuff?

Pass, unless you’re investing in it for speculative purposes. Even then, sell quick, cause you know this won’t be the last time we’re going to see this new, mysterious, provocative portion of Batman’s life at 7 bucks a pop.