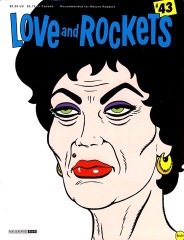 It’s a packed issue. Six stories, three from each brother. While Beto’s got one wordless one, he’s also got a sixteen panels a page one. Packed. And kind of entirely unexpected, as far as Beto’s stuff.

His first story catches up with Petra and Fritzi–the two half-sisters Luba doesn’t know she has in the states–as well as their mother, Maria. The story jumps all over, time-wise, and is mostly about Gorgo’s involvement with the family. It jumps around so much it’s hard to say whether it’s all reality or some of it might not be, but there are some definite events. It’s rather unsettling at times. Beto does eight panels a page, with some fantastic art.

While he maybe has said “Farewell” to Palomar, he’s building a lot off the Poison River story arc.

Jaime also expands with the next story, giving Maggie’s cousin Xochitl and her family their own story. Xo’s the wrestler who never wins. The story’s this gentle family thing with the three kids bickering about what TV to watch and Xo and her husband have a late dinner and a big fight. Lots of character stuff in a few pages, with some really nice art. It’s a cute and intense story. The realities of domestic bliss angle works.

Then Beto’s got this wordless three page boxing match. Just two fighters pummeling each other. Great art. It’s just the two fighters too. Around them is endless black. Real good. Beto’s getting a lot more experimental with the visual narrative lately.

Next is Jaime’s flashback to 1967 Hoppers and Ray and his fellow kids being excited about Christmas. It’s three pages and cute. Not much else to it. Lots of exagerated expression and the possible implication grade school Doyle is already a lush.

It’s certainly nowhere near as ambitious as Beto’s Pipo story, which is that sixteen panels a page one I mentioned earlier. Sixteen panels a page and maybe five hundred words a page. It’s intense. The story is in the text, which is Pipo’s first person recounting of her present situation and how she got there. Beto also brings up the whole “Pipo and Gato are back in Love and Rockets and Gato’s beating her” thing, which he’s always avoided until now. Not sure it was worth waiting thirty issues for the whole story, but it’s nice to see him finally address it. The art is Pipo leaving Palomar for Los Angeles and then her adventures in Hollywood. The story’s exceptionally dense and good.

Though, again, when Beto suggests he’s done with Palomar does he just mean the place?

Finally, there’s a Maggie story. Or a Perla story. Penny tries to get her to get a mechanic job. There’s some development–Maggie makes a date and discovers someone’s got a crush on her. Someone unexpected, not the guy she makes a date with. There’s a flashback, which informs some of Maggie’s situation when Jaime came back to her a few issues ago, and a lot of Rand Race mentions before he finally returns. Well, in a newspaper story. The story’s good, if a little less ambitious, narrative-wise, than even the kids at Christmas one.

The issue showcases a big constrast between Los Bros–Jaime’s still avoiding things (that Maggie flashback could’ve been its own story and, even though her first return story was excellent, maybe should’ve been revealed first) while Beto’s examining them. Even if the timeline occasionally gets fractured too much.

Also, while the last few issues certainly “felt” like they were wrapping up Rockets (which is now t-minus six issues to end), this one doesn’t. The Pipo story doesn’t feel like a conclusion but a beginning. And, hey, kid Ray is just as engaging as adult Ray.