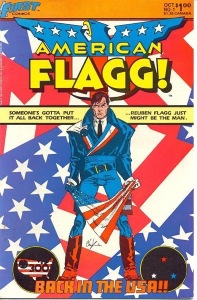 Recently I spread the word on Howard Chaykin’s recent series on the history of comics from the inside, Hey Kids! Comics!, being a success for the seasoned comics creator. Within that review, I mentioned his earlier effort, American Flagg, which I believe to be his most successful creation. So lo and behold, here I am at one of the local comics shows, and what leaps into my hand but a copy of AF #1. Didn’t look like it had been read, was in a clean bag and a board, and was for sale for the bargain price of one dollar. Obviously an omen, I had to relive this older favorite of mine.

Chaykin, who’s made his rep depicting high adventure, lusty, cynical, violent hero types, perhaps like many creators, uses his leads as a portrayal of themselves as center actors, living through their characters. Howie is certainly guilty of this, but while his leading males are certainly bigger than life, they are also infused with an everyman sense of how outrageous their situations are, and a sense of indignation for being put there. Rueben Flagg, our protagonist, is an out of work soap opera actor replaced by a holographic projection, and finds himself working a crap job as a law enforcement officer at the local Plexmall, a microcosm of what future society holds for us, excesses and all. It’s midwest based, with the Plexmall inspired by suburban Chicago malls, with numerous local inflections sprinkled along the way.

To Chaykin’s luck and First publisher Rick Obdiah’s credit, Chaykin gets LOTS of leeway on mature content for a comic I could of sworn was on the newsstands. Flagg jumps right into the action, the basic plot and numerous characters introduced at breakneck speed to keep action in the forefront. While they may display a stereotypical slant to them, Chaykin’s self sense of interest leaves a fresh, spicy imprint on all, giving his actors a personal distinctiveness rare among comics, especially right off the bat here. The boundaries of good taste are also pushed a bit, with suggested sex, drugs, and continuous gang violence just the beginning of this ride.

While Chaykin is always on the forefront of narrative graphic panel composition, American Flagg displays an assurance of talent, a mature mastery of eye movement, composition, and the full integration of literal word messaging within the panels contents. Rare indeed are the experimental approach and the common sense of storytelling disciplines working in perfect tandem as they do here.

Yet another strength in Chaykin’s bag of tricks is is an ability to constantly invent costumes and clothing. The thought and detail here should be a visual lesson to any creator of what it takes to produce a multi layered, textural reading environment. This makes the comic repeatedly accessible, each new read revealing previously missed visual cues. I really didn’t notice the “ben day dot” effect till my second read, that gives the figures another easy to achieve level of depth, allowing Chaykin to focus elsewhere within the panel on other inventions.

Big kudos to “new” letterer Ken Bruzenak here, who’s skill at typography and design take Chaykin’s birthings to a new level. There are literally dozens of fonts on display here, encyclopedic in their numbers, yet fully clear with their intent and narrative focus. Flagg incorporates figure drawing, graphic design, and typography to a high level here, and it works just fine. Lynn Varley’s limited palette with its 64 standard printing colors is also a demonstration of what pros can do with skill and limited means. What both accomplish here without computers certainly paves the the way for later practitioners.

While one can quibble with Chaykins manish approach and overtly sexy derring do, it’s obviously what inspires him to do comics at this level in the first place. What he does with 28 pages here is a visual testimony of his skills, and a “restrained” approach for a wider audience. All of the actors here are likable, stylish, and leave a great impression with the reader, despite their role in the drama.

Like the fine arts, comics sometimes are so far ahead of their time, their true value not recognized until much later. This books mainstream accessibility along with its continuous sophisticated display of invention, form a perfect balance of commerce and creativity, easily placing it into my pantheon of favorite comic books.

American Flagg, now over 35 years old, still remains as fresh and different as the day it was published, a superior effort from one of comics modern masters. Quite the bargain at a buck, which was also its original cover price, by the way.