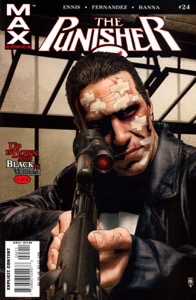 So in the last arc, Ennis found the pulp in Punisher MAX in a non-pulp setting. This arc ends in a pulp setting but without pulp storytelling. Instead, it’s this pensive, depressing look at people trapped by their lives. O’Brien realizes she’s trapped in this dark, violent, ugly world and only ever gets glimpses of the world outside it. Frank’s world. The real world. And in the real world the six issue story arc, which features gunfights, explosions, desecration, torture, and Frank Castle post-coital, it ends on anonymous street, in front of an anonymous building, with anonymous hostages, because everything is anonymous to Frank (and O’Brien). Everything but the mission. Everything but the purpose.

Ennis doing character development on Frank in Punisher MAX is always uphill. The series is set in the present, Frank’s been punishing since the mid-to-late seventies, we don’t get any information about those years. Other than he used to be more troubled by what was going on in his life. Nicky Cavella brings it back in this arc, which lets Ennis do that character development, but he’s always careful to pace it out. Frank’s big revelation came—we learn later—in the previous issue; he shares it at the end. The peace he’s able to find as it relates to his mission, his purpose. Even with the art, which is probably the best in arc—and still not very good—the end is very effective. You can feel the weight and calm in Frank, which is the whole point of Punisher MAX. Not to make Frank sympathetic, but to make him… rational.

The issue’s kind of strange as an arc finale; most of it is wrap-up. There’s a big action opener, but it doesn’t relate to anything before or after, not for Frank or O’Brien. Then Ennis hurries through Frank, O’Brien, and Roth’s blackmail scheme with Rawlins in order to get to the next action sequence, when Frank finally confronts Nicky Cavella after five issues of escalating animosity. It’s a “hero” moment for Frank (Punisher MAX doesn’t address the idea of Punisher as hero, but it definitely explores how he fits that expectation) but there’s no time to celebrate. Turns out there aren’t hero moments for Frank or O’Brien.

With better art, Up is Down and Black is White could be the best arc in the series so far. Instead, it’s the second best. Ennis has figured out how to work it; how to do the character development, how to handle the extremes, how to handle the narrative expectation. It goes all over the place, is always focused, is always expansive.

The ending, which has this wonderful detail about Nicky’s experience of it versus Frank’s, is lovely. Frank’s world is ugly, tragic, and hopeless, but there’s a definite, primal beauty about it.