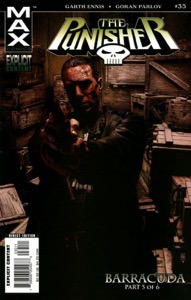 It’s a bridging issue but also not. Actually, there are some major plot developments here, just not much involving Frank. Other than him surviving and deciding it’s time to stop screwing around with the Wall Street guys and just take them out; thanks to Barracuda, Frank’s now taking things as seriously as he should have been before.

He doesn’t have that observation in his narration, but he’s dealing with a concussion for sure and probable brain damage so he’s too exhausted to reflect on the mistakes. He’s also got a time limit. Today’s the day—the Wall Street guys are going out on a boat and Frank’s going to do something to it. Ennis doesn’t reveal what, as next issue needs some surprises, but it involves Frank scuba diving for a bit. Also seagulls pooping on him, because Ennis wants to keep it a little lighter. And Parlov draws great passed out Frank and bird shit.

But Frank’s not in it much. Most of the issue has boss’s wife Alice and her lover (and boss’s flunky) Dermot teaming up with Barracuda. Ennis keeps Barracuda dangerous but starts using him for comic relief too, which would be fine if it didn’t make him seem less capable. He doesn’t think his plans through, eventually scaring Alice enough she decides they’ve got to get rid of him. So Barracuda is double-crossing the boss for Alice and Dermot and they’re going to double-cross him just… because.

As Barracuda’s characterization starts getting iffy, Ennis turns Alice into a much better character than he ever suggested before, which is too bad. It would’ve been nice for her to get all the agency earlier. Well, agency for something other than cheating on her husband with his protégé. And protégé Dermot’s need for a stronger leader comes through here too, even if Ennis doesn’t do much to it.

It’s a perfectly entertaining issue—great art from Parlov—but it’s pretty clear Ennis doesn’t have much more ambition for it than the entertaining. Gone is any character development for Frank and the Wall Street schemers are adequate villains, but far from great ones. Barracuda too seems like a bit of a misfire. It’s impossible to believe he could’ve survived with so many appendages intact given his irresponsible nature.

Instead of a worthwhile foe for Frank, Barracuda’s basically comic relief. Makes you wonder if someone told Ennis not to go so dark with the arc midstream.