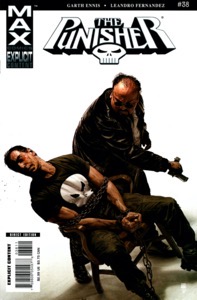 Why is the only thing Fernandez unable to reliably draw, even with his much improved (and self-inked) Man of Stone style… why can’t he draw the Punisher? Frank’s out of action the entire issue, literally sitting around on the telephone, and Fernandez can’t seem to figure out how to draw Frank’s arms. It’s really, really weird how he can handle everything else but not Frank.

So I guess it’s good Frank’s only in the first couple pages and the last page. He’s on the phone with Yorkie, Yorkie’s about the blow O’Brien’s brains out. The British are helping the Americans protect former Taliban and O’Brien’s killing former Taliban so she’s got to be got. Frank learned about the British involvement thanks to BBC America, which is a throwaway line but does give an idea what Frank puts on in the background while cleaning his guns. There’s quite a bit about how Americans war—the British soldiers aren’t happy about taking assassination orders from the CIA, evil ex-CIA guy Rawlins points out they can get Frank to Afghanistan—he’s not going to want to get into a firefight with the angry Russians in New York City; Americans like going to war in other people’s countries. Quick but important digs from Ennis, as Man of Stone is more about geo-political conditions than anything with Frank himself.

So besides the frame, the issue is about Yorkie and his team capturing O’Brien and getting into a fight with Rawlins and the Russians and then Rawlins getting dangled over a cliff until he comes up with another plan to take down the Punisher. The Rawlins and Russians stuff is forward moving, while the O’Brien and Yorkie pages are more like cast catch-up. Ennis seeing what the pair is like together, having written them both alone. It’s Punisher MAX world-riffing. It’s a good use of pages, as far as the single issue goes, though maybe not for the overall arc. Especially since Yorkie has this great closing joke for O’Brien and the comic skips her reaction.

Actually, the comic skips O’Brien’s reactions to almost everything. She’s either quiet or muzzled.

If the arc has an epical structure, outside the issue’s individual ones, we seem to have just gotten to the end of the first act. Ennis is gradual about setting up the ground situation, far more committed to the individual issues’ plotting. Even if this one doesn’t much involve Frank.