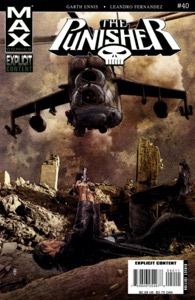 Man of Stone puts Frank into a world where he doesn’t belong. This issue has him showing down with rogue Russian general Zakharov in Afghan mountains; the general wants Frank alive so Frank will confess on TV. See, Zakharov has a romanticized view of himself and his soldiers. His resolve is a strength and he sees the same thing in Frank, only Frank’s got no romanticized view of himself or anything else. Zakharov’s projecting. The world where Frank doesn’t belong isn’t Afghanistan or shootouts, it’s in the daydreams of general’s and CIA agent’s (good and bad).

Frank doesn’t get jack to do this issue. He gets a kind of big action set piece but it’s not about his experience of it, rather the damage he does on others because he’s the Punisher after all. He and O’Brien hang out a bunch but it’s all her talking and him occasionally showing interest but eager to remind her they’re not going to prom after they take out the Russians and her evil ex-husband. There’s no Frank narration this issue either. When he’s got an exposition dump, it’s brief and in dialogue to O’Brien.

There’s also a lack of preparedness on Frank’s part, echoing the previous story arc, which is either Ennis covering for dramatic manipulations or Frank just being out of his element. Though I suppose in this story, it could also be he was too busy making the beast with two backs with O’Brien.

After three issues of being a prop, O’Brien gets her big monologue here and it’s… okay. Fernandez does a better job with O’Brien as action hero in the issue than Frank, but he doesn’t bring anything to her talking head panels. He doesn’t have the timing for it, which isn’t a surprise. It’s effectively done, it’s just not as good as it could be. Because O’Brien does belong in this world only she wishes she didn’t. Or wishes Frank did.

Even though Man of Stone is far from the best arc—and, frankly, not the bounce back (so far) the series needs post-Barracuda—it does at least do something with the characters. The only new character this arc is Zalharov’s main flunky, who hates Rawlins; they’re kind of comic relief. Everyone else is back from previous arcs, laden with baggage. Good baggage, well-placed baggage. Ennis’s characters are in better shape than his narrative needs.