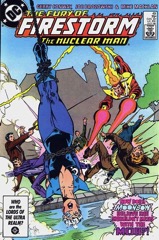 It’s sort of a goofy issue, with Firestorm’s lawsuit ending in the first scene, then the rest of the issue is the Moonbow story. Conway continues the Marvel vibe–maybe it’s because Moonbow (a female college student who moonlights as a vigilante) looks like a Marvel character, but also because there’s no other vibe to the comic.

Conway doesn’t give his protagonists anything to do. Martin has a date, which Ronnie interrupts for a Firestorm outing, and Conway uses the interruption so as not to make any decisions for Martin. It’s more treading water.

There are art problems too–Pablo Marcos and Rodin Rodriguez join Machlan on inks and the issue never has a consistent look to it. Brozowski again does all right with his page composition and the comic moves at a good pace.

Even the ending, with Firestorm and Moonbow finally crossing paths, moves well. 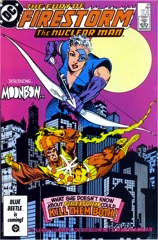 Firestorm hasn’t cratered or anything so severe, but Conway does seem to have found a new level for the book. It’s a little low, sure, but he’s hitting it consistently.

And even though Brozowski and Machlan leave a lot to be desired in the art–creativity–the book does look okay. It doesn’t look much like a DC comic this issue, however; it looks a lot like an eighties Spider-Man, which is fine.

Conway doesn’t do anything fresh or inventive. Firestorm is getting sued by Ronnie’s stepmother-to-be and she’s real impressed with his speech in court. Of course she’s impressed, otherwise the story might do something unexpected. Ditto the introduction of another girl in Ronnie’s life. Could she be the bow-wielding vigilante plaguing Pittsburgh’s mob?

Conway doesn’t even make that one a surprise.

It reads okay in parts, not okay in others. It’s bland superhero stuff.

It’s not a bad special guest star issue, just another pointless one. Blue Devil and Firestorm are now teamed up–after a couple issues of mistaken fighting–against all of Firestorm’s villains.

Brozowski continues to do a very clean, obvious approach with the composition; he and inker Mike Machlan don’t have a single outstanding panel in the comic, but there also aren’t any lemons. It’s straightforward superhero stuff and, given there’s a hallucination sequence with demons, the art works out okay. Never anything more… but okay isn’t terrible.

As for Conway’s script… he tries a little character development (Ronnie’s dad and stepmother-to-be are hostages of all his villains, along with a mention of one of the villain’s failed rehabilitations), but it’s mostly action. It’s not great action; the giant-size computer showroom is goofy.

Like I said, it’s not too bad. It’s a guest star issue, big whoop. 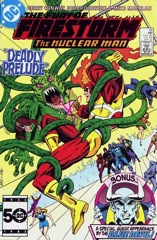 Joe Brozowski appears to be taking over as regular penciller. He does okay; he tries real hard with expressions, which don’t tend to work out with the regular people but it’s fine with the action scenes. He’s stuck with plotting out an action scene in an arena–a bunch of giant computers on loan from the Batcave.

Conway plots some really odd action scenes in this series, really odd locations. It might be a natural side effect of having a flying superhero in stories more in the web-slinging superhero level.

For instance, this issue has lots of character development for Ronnie and his father. They finally hash it out about a number of things, like Ronnie’s problems with his bully and the father’s fiancée. Though Conway still hasn’t made her likable and he does reduce Ronnie’s girlfriend to a non-speaking prop. 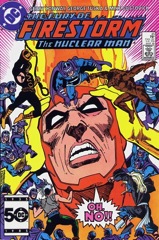 It's funny, but George Tuska really brings the book around. He's just filling in, but Conway's got Multiplex (Firestorm's foe since the second issue of the original series) getting all the villains together–although Firestorm's rogues gallery doesn't have a clubhouse–to attack him. Or something.

But it's a very Flash, very Spider-Man story and Tuska just brings that fun, Silver Age vibe to the book. The art isn't great–some of he and Mike Gustovich's faces are atrocious–but it's got a lot of energy to it. They bring the same energy to the civilian storyline, with Ronnie and Martin both having problems at school. Ronnie because his stepmother-to-be is suing Firestorm and Martin because his sexy dean has the hots for him.

Conway's prudish portrayal of Martin–along with a chaste one of Ronnie and his girlfriend's relationship–is peculiar. He teases character development then doesn't deliver.

Still, the Tuska energy gets it through.

Akin and Garvey’s inks are a little better this issue. Not much, but a little. There are a lot of action sequences and most of them come off well, as does Firestorm’s trip to the sun. Martin has some theories about their powers and wants to investigate; for a moment, Firestorm feels like sci-fi and it works better for it. Conway’s engaged and imaginative.

The main story of the issue, however, just gives Kayanan an excuse to draw elaborate fight sequences in Miami. They’re fine, they’re just pointless. Ronnie and Martin get involved because they see it on TV. And Conway wastes a lot of time setting up the characters for this pointless excursion.

Well, it’s an annual so I guess it’s the special element to the issue.

It’s Conway’s most ambitious issue in a long time. The first third of the issue is Firestorm versus a natural disaster–a freak tornado in Pittsburgh. Of course, Typhoon is creating the tornado to draw Firestorm out, but Firestorm doesn’t know it. Conway does a lot with the narration and the trying to use it to pace the scenes.

It doesn’t work, but it’s ambitious. Maybe if the art were better. Machlan’s inks are a mess this issue. They’re better in the superhero part, but still a mess.

The second part of the issue is Ronnie and Martin’s adventures at school. It’s just a regular day–they’re worried they can’t turn back into Firestorm but it’s barely a plot point. It’s all character development; if it weren’t for the dumb high school nemesis, it might work out.

What is it about Kayanan? Why does he never gets the right inker on Firestorm? Mike Machlan is better than the last couple guys, but still not great. For a lot of the pages, Kayanan seems to avoid a lot of close-ups because Machlan butchers the faces.

The story has Ronnie and Martin at college, with Ronnie adjusting to college freshman life and Martin's thought balloons covering his unease as a new professor. He doesn't really get a story, however. And Conway gives Ronnie too much. Between football tryouts, which Kayanan doesn't break out well, his girlfriend and his high school nemesis plotting his downfall… it's too much. What's really bad is how ineffectual the girlfriend is as a character; Conway basically reinvents her every seven issues.

The other plot–villain Typhoon's return–as awkward. Conway wants him to be both dangerous and sympathetic, but goes to far in the first direction.

It’s a thoroughly decent Crisis crossover. Firehawk and Wonder Girl are trying to find loved ones in New York and they run into all sorts of problems since New York City is split between different eras.

Akin and Garvey don’t do great on the inks but they do better than they ever have before. The people’s faces don’t look two dimensional anymore. The action stuff is good and Kayanan breaks out a very nice flying sequence.

Eventually there’s a Tomahawk guest appearance when they find themselves in colonial America Manhattan. There’s some adventure with Firehawk and Wonder Girl helping the troops against the British. Conway presents both time periods well; when they go to colonial time, it feels like they’re guesting in a Tomahawk story.

There’s a big narration thing from Firehawk about her embracing life as a superhero. It’s not great, but it’s serviceable. It’s a crossover after all.