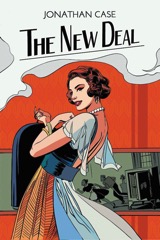 If it were still the nineties (or even the early 2000s), The New Deal would be the hot Vertigo book with TV or movie buzz. How could there not be? It’s perfect. It’s got two strong female protagonists and one lovable, but not dismissive, male protagonist. Creator Jonathan Case goes a little overboard with the celebrity name dropping, but he’s doing it affectionately.

And the idea of someone not caring about being directed by Orson Welles in 1936 is kind of awesome.

There’s a peculiar pace to the comic too. Dark Horse didn’t go with a limited series, even though the comic is split into four thirty-two page chapters, and it’s hard to say if Deal would read as well in multiple sittings. The art would still be fantastic, but Case employs a few too many red herrings. They’d get annoying stretched out over four months. Over forty minutes or so, however, the red herrings just become part of the comic’s texture.

The format also allows Case’s art room to breathe. He’s got a lot of detail in the setting, but he’s more interested in the characters and how they interact with one another. He paces out conversations beautifully. He never quite goes long enough to call it “talking heads,” either. And he manages a lot of visual expression humor in a realistic style.

Maybe I just want it to be a Vertigo series from twenty years ago because then it would definitely get another series. Case sets it up beautifully; it’s a complete change from the beginning of the comic, but an entirely reasonable resolution.

The Fall of the House of West is heavy stuff. There’s a little bit of comic relief with Aurora’s friend Hoke having a crush on her, but it doesn’t get much attention. Writers Paul Pope and J.T. Petty don’t want to let up on the reader, which is a little surprising.

Maybe the big character development for Aurora at the end of the comic sways things, but–by the end of the book–the reader knows Aurora less well than at the beginning of the comic. Her character arc is huge and Pope and Petty don’t deal with the full ramifications here. There isn’t time for it. Her journey is the point, the reader’s experience of that journey is the point. Plot twists aren’t the point.

Similarly, Pope and Petty leave the MacGuffin unresolved as well. They’re able to get incredible emotional response from the reader only to belay any resolution. It keeps the reader invested. There’s a definite commercial quality to the comic–and Aurora West as a character–but they aren’t chasing a movie deal. They’re chasing the reader. They’re trying to get their readership invested.

David Rubín’s art is decent. Most of the comic takes place at night, which is fine, but Rubín’s got a lot more personality on well-lit subjects. The panel composition is fantastic, though; it really helps the comic be so welcoming.