I may have already read this issue of Lodger. I thought I’d only read (and mostly forgotten) the first issue, but this one seems very familiar. Going into it without having read the first issue recently and not really remembering the setup—it’s about some white guy named Dante who travels around causing trouble without people realizing it while he does his travel blog and then some white girl who’s chasing him down because he did something to her. Can’t remember if he did it in the first issue or if it’s going to be a reveal later on in the series. It’s not in this issue.

I also don’t know how Lodger would read if you were unfamiliar with David Lapham, co-writer (with Maria Lapham) and artist. There’s no way there’s not some creepy thing going on with the Dante guy even if he weren’t blogging about how he happened onto a serial killer—even though it’s fairly clear he’s the serial killer who’s framing the other guy—and perving on a teenage girl. The Lodger is just a Stray Bullets remix. It could even be a spin-off, though apparently not at IDW and Black Crown (Stray Bullets is at Image, at least as of this issue’s publication based on the house ad). So it’s hard to get too invested in any of the characters. The teenage girl, Ricky, is a victim, whether she knows it or not, the reader knows it. Her mom is a victim. Her dad is a victim. And so on and so on.

The issue starts a little weak on art—Lapham’s very inky style doesn’t work well in extreme closeup but does great with medium shots in small panels—but it’s fine. For what it is, it’s fine. Is there any reason to keep going on it? Did I keep going on it before? I never wrote about it, but there’s a long stretch where comics only went on the Comics Fondle podcast versus blog responses. But I don’t even remember talking about it. I just remember reading it and thinking… oh, Lapham’s doing the teenage girl victim in danger thing. Again.

It’s kind of his genre.

Had lunch with a friend recently and afterwards went to a comic store with him. While nothing hit me on the the mainstream rack, the indies had me curious. So here, in no particular order, and possibly not as new as “this weeks long underwear books”, is a smattering of what caught my eye, and got me to purchase them.

Pope Hats #4,5– when I got home, I discovered I had issue 4 in my “stack”, so I read ‘em both. Hartley Lin, current master of short stories about everyday people with issues, goes with an anthology style of shorts in 4 with good results. A half a dozen quick narratives are the stomping ground, with a huge swath of characters and some poignant conclusions on them. While each has a distinctness of it’s own, it s in issue 5 where Lin lets his inner talents loose with a lengthy 60 page story all about his well realized Frances, a young lady who’s watched her bff/roomie move away for work, and now deals pretty much alone with her position as a law clerk at a huge firm. While I could say it’s a more complicated version of Betty and Veronica, the love he has for the fate of Frances is more than communicated with a warm, formal, cartooning style that nearly brought me to tears here more than once. I now love Frances, I just can’t help myself. 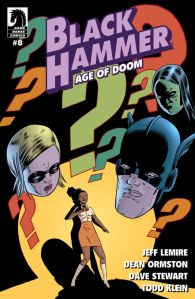 Black Hammer-Age of Doom #8– while I picked up this middle issue cold, I was still familiar enough with the concept and the group here enough to catch on to the endless reboot theme thats underlying here. While there’s not terribly much meat on this comic, Dean Ormstrom’s art carries it, along with just enough willingness on my behalf for patience to see where Jeff LeMire is going with this. On the edge of teetering from it’s own weighty premises, Black Hammer gives something for those too crazy or stupid to give up on superhero comics. 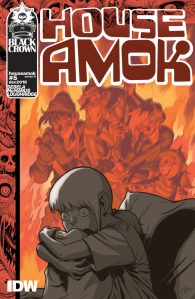 House Amok #5 – one of those favorite Vertigo replacement series from Black Crown, Chris Sebela manages to take a fast paced crazy family story with likable characters and just about kill all the momentum he built in the first four issues. Not the ending I wanted, but Shawn McManus’ great cartooning helps digesting this mess immensely. Decent first four issues, though, the train wreck that composes issue 5 kills it.

Lodger #2 – Another Black Crown book, noir styled authors Maria and David Lapham relate a story here about a nomadish guy that gets involved with certain peoples lives, mostly for a bad ending for them. Lapham’s experience with down trodden folks and a love for depicting real violence give this one a convincing tone, and makes me curious for another.

All in all, not bad. Makes me want to try it again sometime. The threat of walking into a comic series cold was balanced by enough talent, and for the exception of Black Hammer, the ability to read a copy of something and get a warm fuzzy feeling while experiencing comics again, enjoying the random issues. 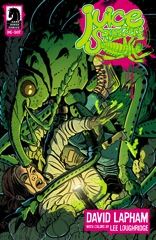 David Lapham takes a really interesting approach with this first Juice Squeezers one-shot. He doesn't try to do too much. He opens the comic with new Juice Squeezer, Lizzy Beedle. She's the only girl on the team of high school students who kill all those giant bugs the world doesn't know about. He changes points of view quite a bit, but it's always Lizzy who's at the center of the character stuff.

Then there's the way the kids go out and hunt the bugs. It's simultaneously scary and safe, with Lapham skipping from character to character. He doesn't go too far establishing any of the other characters, usually just giving them distinct names and personalities, but not entire scenes to themselves. He doesn't want to lose the focus.

The conclusion nicely ties up this introduction issue while keeping things open.

Great art too. The movement is outstanding, the bugs creepy. 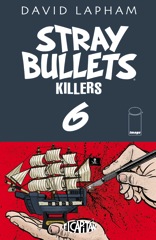 Well, it’s far from the worst issue of Killers. It’s more with Virginia and her mostly lame boyfriend Eli; Lapham does very little to show why Eli’s any good as a boyfriend other than he’s usually sweet to Virginia.

This issue has him not being sweet for the first time and it’s an awkward scene. Usually outburst scenes in Stray Bullets lead to some kind of murder scene. This time it leads to teenage angst.

It’s also one of the first issues–Killers or regular series–where something turns out not to be the worst possible scenario. Except maybe some of those early Virginia issues where Lapham frequently threatens her to keep the tension high. It’s a Stray Bullets comic without the big finish. Very odd.

The art’s really lazy at times; Lapham rushes through the talking heads sequences and it hurts the comic. Ditto the narratively pointless hallucination subplot.

I remember when the Amy Racecar issues of Stray Bullets were wildly imaginative, wonderfully constructed black comedy. This issue, the first Killers issue to bring Amy back… is none of those things. Instead, it’s Lapham doing the “Amy Racecar as painfully obvious analog to Virginia’s life” approach.

It’s depressing–not because of the content, but because Lapham jumps all over the place to tie in to the original series (both the Amy issues and a little not) and to the Killers series. While one could argue the unanswered questions in the Amy Racecar stories are because Virginia herself doesn’t know the answers but it’s possible she’s dwelling on these subjects so they’re okay in the issue, I don’t think so.

Lapham wants this story to inform the rest of the work, not do anything else whatsoever. Not even make the reader laugh or cringe. The vague hints barely register a shrug.

Call Me Gilgamesh or The First Time Ever I Saw Your Face It Was On Your Butt; writer, artist and letterer, David Lapham; editors, Renee Miller and Maria Lapham; publisher, Image Comics. 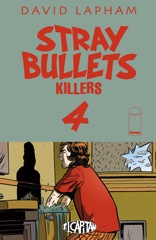 There's still a lot of good stuff in the comic, maybe even some great stuff; the connections almost seem added later. Lapham really tries hard to make Killers, save Virginia, its own interconnected thing.

It's a fine issue, but more of what I expected from Killers than Lapham has been doing. Until now, the nostalgia has been subtle. Here, it's forced. It's still above average until the desperate third act.

Is it the comic Lapham always intended to tell? Who knows. Who cares.

It ends with Virginia okay and heading out into the world because she can’t lead a regular life. I don’t care if I spoiled it. I won’t spoil how the whole kidnapping thing comes to a conclusion because it’s not worth talking about. Lapham has his chance a few times in that scene to do something good and he doesn’t.

But at the end, and here’s another spoiler, Virginia gets it on with Leon. She loves the kid, he loves her. Lapham’s spent this series showing women getting beaten, raped, murdered. It’s the first time there’s some romantic love in this comic in many issues and more years.

And he skips it.

He tries some earnest sentimentality at the end, but he’s faking it. 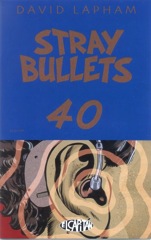 This issue is the story of Kevin’s father. Kevin is the bad guy who has kidnapped Virginia with badder guy Huss.

Kevin’s dad is deaf and he’s a drunk because a low level mobster took off one of his fingers and he can’t hear his kid trying to gang rape a teenage girl. Lapham’s aiming for the stars here as far as artistic ambition.

Oddly, he clearly thinks it’s a great idea–the storytelling device with the deaf guy moving in front of all this action and not being aware of it. But the art’s crap, so it’s not like he worked on it.

Lapham also thinks it’s a good idea to reduce a character who was once one of the best female comic book characters to a mannequin who’s single purpose to be exploited. Apparently, Lapham can’t do anything else with Bullets but assault, rape or molest Virginia.

Silly me, how did I forget Lapham always follows up hard cliffhangers with Amy Racecar stories. Sadly, not even Amy Racecar is safe from Lapham’s laziness.

It isn’t a story about Amy–her sidekick, William, returns, because apparently Virginia and Amy both always need sidekicks now. She doesn’t narrate, which is good, because it’s a terrible story and I wouldn’t have wanted to read Lapham write bad Amy Racecar narration. It would have made me sadder.

The issue has her in feudal Japan because someone–probably Lapham, not Virginia–was on a Kurosawa kick. Lots of visual references to some of Kurosawa’s most famous samurai movies. Not to mention a direct homage to Yojimbo. It’s too bad Lapham didn’t spend the time on the actual content of this issue.

Also, there are a lot of bad puns.