I think the problem is simpler than I would have thought–by problem I mean why Conway’s not as on the ball with the series anymore. He’s not even taking the time to script, just plot. Andy Helfer’s got the inglorious task of scripting. It’s hard to hold the issue against Helfer, the series’s breaking.

Atari Force works when it’s about the characters and García-Lopez’s approach to sci-fi. There’s a lot of villain stuff–it’s just Bond villainy at an intergalactic level. Maybe with some Road Warrior thrown in. Boring.

Worse, the character stuff this issue is tepid. Dart being patient with Blackjak isn’t engaging, especially not with Helfer’s very calm, almost feminist approach to his betrayal. And surfer boy’s trial scene is really weak.

Hopefully the series will improve.

There’s very little personality to this issue. About the most of it comes from Babe–the rock creature–who apologizes at one point. It shows something going on besides the main plots, which are three.

First, there’s the deception on the team. It’s all really predictable and Conway doesn’t spend any time trying to make it palatable because it’s not. It’s too obvious and Conway can’t focus on it without making the characters seem too dumb.

Second, there’s surfer dude in captivity and the people around him. Again, not very engaging stuff because it’s a bunch of supporting cast members talking about a main cast member and the main cast member not doing anything.

Finally, there’s the bad guy. The Atari in Atari Force really comes through a few times because a lot of his dialogue sounds like terrible video game boss dialogue.

Interesting tidbit in the letter pages this issue–maybe there have been more and I missed them, but the book is intended to be an ongoing with a twelve-part opening story arc. It gives Conway some more leeway with bringing in all this exposition–there isn’t much this issue, actually–because it’s at such an awkward part in a maxi-series. Doesn’t the problems with too much exposition, but it’s intentional anyway.

This issue has Dart’s lover coming back and he’s got a story for her about their escape. After a conjugal visit. Conway likes to shock with this one, apparently. Even more is when the guy–Blackjak–includes a nasty detail in his story. He takes advantage of one of García-López’s cute aliens. It’s a mean, harsh sequence.

The issue’s mostly Dart and her guy’s flashback and then surfer dude on the New Earth planet. Conway writes at a great pace; the cliffhanger’s pleasantly sudden.

First observation–Conway and García-Lopez are aware they’re stocking the team with adorable, mischievous space aliens. It’s kind of weird. Must be a way to make the comic more likable at a glance.

This issue, nine issues into the second series, recaps events from the first series. Pertinent events. Surfer boy has gone back to New Earth to talk to people–hopefully he’ll bring the team back some fresh food and toilet paper–and besides a bonding session with his shrink, it’s all back story.

The art in the rest of the comic makes up for the rush job on the flashback. Conway checks in with some of the rest of the cast and treads a bit of water preparing for the surfer to get back. The likability helps the treading go smoothly.

It’s a slight issue and Conway overdoes the flashbacks but he’s got the series firmly footed. 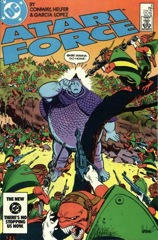 Given Atari Force is Conway’s series, it’s too bad the best issue so far isn’t one he writes. He plotted for Andy Helfer and gave him a choice issue. It’s a done-in-one, the first of the series, and it manages to be both gritty and affable.

Babe, the sentient mountain baby–who’s basically just a huge egg with a lot of power and no anger–gets stranded on a planet. He’s got the Hukka (the adorable sort of pet who fills some of the R2-D2 cuteness) but he’s lost.

Helfer juxtaposes Babe’s trials against the team’s. They’re going through lots of drama; even those concerned for the missing Babe don’t realize he apparently can’t be hurt. Babe’s in the middle of a planetary invasion, it turns out.

The art’s lovely, the story’s gentle without ever being condescending. It’s an impressive issue, raising the bar for the series. 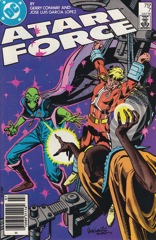 The series is definitely back on track. Not only does Conway come up with a way to utilize all seven principal cast members in the issue, he also comes up with a very amusing turn of events.

Before getting to any of these plot developments, he opens with Tempest’s father going over to the bad guy’s spaceship in what he thinks will be an exchange. In this sequence, Conway makes it very clear the father, Martin, is the action hero of the series. Conway hadn’t utilized him well enough before. All of a sudden the character seems interesting on his own and not as an appendage of the surfer dude son.

There’s a lot of humor too. Dart and Pakrat are good comic relief, though the psychic gets the best jokes. Not many, but good ones.

It’s once again imaginative work from Conway, with some fantastically rendered pages from García-López.

García-López returns to full duties and Force gets back on track. Mostly. Conway seems to be influenced by Star Wars–and I’m intentionally using the passive voice, because I doubt he really meant to rip-off going on to the Death Star with some plot accouterments.

Dart and Tempest have to go over to the bad guy’s ship–the bad guy also looks a little too much like a space knight (or Sith Lord); it’s a neat design but it’s way over the top. Unless DC was hoping to sell toy licenses. Anyway, they’re on his ship, the rest of the team is on the regular ship. There’s drama. It’s good.

Conway’s really utilizing the estranged father and son relationship, with Dart thrown in as an awkward sort of sibling. Given there’s a telepathic psychologist on the team, a little much exposition on that subject… but it’s good.

The comic flows quite well. 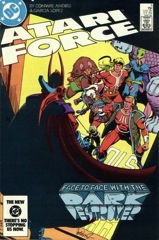 There seem to be some pages missing, like the scene where Martin talks his kid into stealing a space craft. His estranged kid.

Conway glosses over that problem, along with the one where Martin convinces his shrink to commit treason to join his mission. The mission, to save the world, isn’t revealed until over halfway through. Seems somewhat unlikely people who sign up without some idea. They do steal a huge spaceship after all.

Multi-dimensional ship, but you get the idea.

There’s not much time for the characters, though the huge baby alien character gets a couple nice moments and the action’s not bad. It reminds a little too much of Star Wars for a moment but not bad.

Conway seems to be setting up the series for high adventure. He doesn’t quite promise it, which might be good since this issue doesn’t deliver any.

What an odd issue. Not because of Dart making out with her de facto brother–the whiny surfer dude–just after her man has died, but because Conway brings back surfer dude’s dad. Previously, the dad (a main character from the first Atari Force series) has been off to the side. He’s been present, but never the focus. Now Conway reveals he’s basically the protagonist.

Then there’s the art. Ross Andru handles the pencils, Garcia-Lopez only having time for the inks. Andru doesn’t do a bad job–he gets very stylized for some of the scenes and the inks are good, but it’s not the same. Force doesn’t pack the same visual wallop.

The issue has the same subplots too, but Conway isn’t really moving forward on them. There’s progress for surfer dude, but only because Dart’s there and his dad’s there.

It’s odd how the plotting problems coincide with the art change.