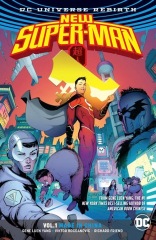 New Super-Man is a lot of fun. Writer Gene Luen Yang approaches it like a serious spoof and artists Viktor Bogdanovic and Richard Friend are very much in on the joke.

There’s a secret Chinese agency developing “The Justice League of China.” They need a “Superman” and pick Kong Kenan. Kenan is a high school bully who ends up on TV because of an uncontrollable urge to help people. Yang doesn’t look at that uncontrollable urge, but later in Made in China, Yang does give Kenan some redemption. His bullying, while bad, has its origins in his unresolved pain. He’s deep.

Luckily, Yang concentrates more on the fun than the hints at depth. There are a lot of big reveals in the second half of the book and everytime you have a reveal, it screws with depth. Yang tries, with one of the biggest reveals, to compensate with backstory, but it’s not enough. New Super-Man doesn’t have the wherewithal to do serious political comedy. Instead, it does a reasonable facisimile version. With bickering superhero teams. Because bickering superhero teams are fun.

Kenan has sidekicks in “Wonder Woman” and “Batman.” They both have not as memorable real names. Batman doesn’t like Kenan, which is simultaneously obvious and ingenious. By the finish, when the team is hanging out in their civilian clothes, Yang has completed China’s deftest character arcs. He’s building a strong superhero comic supporting cast, but he avoids obvious bonding moments. It’s cool. The relationships between all three, particularly “Superman” and “Wonder Woman,” are great.

The stuff with Kenan and his dad, which turns out to be extremely important not just for reveals and epical plotting and so on… well, it could be better. The dad’s a little too mysterious, too disinterested. Yang waits too long to work on the relationship. It starts as C plot and waits a real long time before rushing to join the A plot.

Bogdanovic and Friend’s art is good. They handle the action and just the general energy of the book. Kenan’s always antsy, physically impulse, even before he has superpowers. There’s a fine visual continuity to the characters as China goes on. Bogdanovic has an excellent sense of composition. There’s not as much detail as there could be, especially on faces, but the comic’s breezy enough it doesn’t register.

New Super-Man is a good time. Yang, Bogdanovic, and Friend build a solid character, solid pitch, with Made in China. Hopefully they keep Super-Man flying.