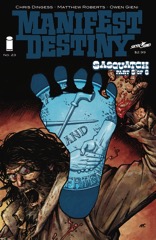 As a series, Manifest Destiny started up and slowly traveled down. Though sometimes it has charged downhill in terms of plotting quality. But Roberts’s art has always been a draw. It’s always been something the series can lean on when Dingess’s writing isn’t cutting it. Until now. Roberts is either in a rush or as bored with the story as I am. He hurries through and it looks bad. Not all of it, but enough of it.

The issue has the crazy flashback guy on a mission from the evil inter dimensional bird god thing. Lewis and Clark are meeting with a Native American tribe to figure out where they’re camping for the winter–I remember when this comic had the momentum of the expedition. It’s shocking how Dingess has let it flop on the deck.

For every solid moment in the Lewis and Clark story, and there are only a handful, there’s something even worse with the flashback guy. It feels like a bad Tales of the Black Freighter knock-off, both in terms of narration as it contrasts reality and the art design.

I don’t think I can do Manifest Destiny anymore. 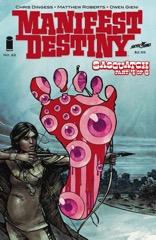 No way, Sacagawea gets something to do. Not a lot, but Dingess actually gives her something to do. Then he skips out on the leads of Manifest Destiny and heads into the past for the flashback. Lots and lots of flashback. The longer it goes on, the more fantastic Dingess is going to have to tie it into the present action. Something really lame with the journal from the flashback, perhaps. Though it makes no sense at this point how the guy could be journaling his adventures.

There’s some great art from Roberts and Tony Akins and Stefano Gaudiano because there’s always great art in Manifest Destiny. This issue doesn’t have much but great art. Well, it does have one surprise choice. I mean, there are a lot of “twists” this issue in the flashback, but it only has one surprise. Unfortunately, Dingess has used up any goodwill when it comes to expecting his cliffhanger moments to go somewhere good. Destiny is a plodding book these days.

The present action is extremely minimal. Lewis and Clark are interchangeable. Dingess has killed the pace of the comic. Yet it’s hard not for the book to compel on some level–Roberts doing this Corps of Discovery Expedition with monsters, it’s really a cool thing. There’s also some really uncool magical stuff.

Manifest Destiny desperately needs editors who can reign Dingess in, who can help break out a story, who can keep the book on track. Until then, I go into every issue expecting it to be my last. 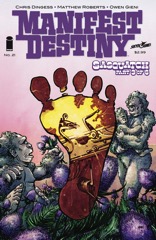 Has this arc always had the little year tags to toggle between the flashback and present action? Maybe it did, but I feel like it didn’t, because the transitions were confusing. They’re still confusing, what with the guy in the past having a journal and there’s supposed to be a journal in the present action from Lewis or Clark but Dingess has forgotten about it. But there’s an effort to be less confusing. The effort is nice. It’s a shame it’s still visually confusing; maybe it’s colorist Owen Gieni but the transition from flashback and back is still way too gentle.

That problem isn’t the big one with the arc–or the flashbacks–no, it’s Dingess’s writing. He’s so fixated on the story in the past, he’s ignoring the main characters of the comic book. There’s an infuriating moment this issue where Sacagawea basically offers to go kill all the attacking cyclops bigfoot monsters and she doesn’t get to go. Why? Because Dingess never, ever lets her loose, which is weird–as always–because Sacagawea the warrior was a promise of the first issue.

Then again, Dingess also promised Lewis and Clark would be characters. They’re irrelevant to the comic now. This whole story arc idea, which does package the comic a little better, is making Manifest Destiny irrelevant itself. Sure, Roberts’s art is awesome and the concept is still okay and Dingess does have his moments as a writer, but it’s not adding up to anything.

The issue ends with promise of revelation and thrills next time. Whoopie. They’re never do enough to make up for the book running on fumes.

I had assumed Manifest Destiny doing a story arc titled Sasquatch meant creators Dingess and Roberts were going for more visibility and media attention, but this issue might prove me wrong. Because the Big Feet turn out to be Cyclopses. Cyclopses humans enjoy consuming. It’s so weird, it doesn’t feel commercially minded. So I apologize for that cynical view of this story arc’s ambitions.

However, it’s still not particularly good. Dingess splits between boring stuff in the present–we get it, the criminals on the Lewis and Clark expedition are going to revolt, all the time, as the comic’s only steady subplot–and boring stuff in the past. A Spanish explorer ghost tells the pre-Lewis and Clark explorer guy in the past to eat the Cyclops and to feed it to the rest of the men. Strong cannibalism taboo for Manifest Destiny, which Dingess is going to get the split narrative for the whole arc. And keeping it is a bad idea. Because it’s boring.

Manifest Destiny is a comic book with giant monsters roaming the countryside and it’s boring. It’s talky, but it’s not talky in any sort of interesting way. Dingess used to present the fantasy historical information in exposition. He doesn’t even bother with that information anymore. It’s still competent and Roberts’s art is still gorgeous but Sasquatch has the series stalled out.

It’s good to have Manifest Destiny back, even if it’s a bit of a messy issue.

Two things are immediately different this issue–a story arc subtitle (Sasquatch) and a flashback to a previously troubled expedition into the wilds of North America. Dingess and Roberts do some solid juxtaposing between expeditions, but it’s strange to come back to the book and for Lewis and Clark to have so little to do.

Let’s not even get into Sacagawea’s utter lack of anything to do, once again. And the other female character has disappeared, because with the story arc subtitle, Dingess is all about setting up the eventual Sasquatch. Just like he once set up Sacagawea. It’d be hilarious if the Sasquatch has almost nothing to do.

Roberts, inked by Tony Akins and Stefano Gaudiano, does have some excellent visuals and the book’s pace is fine. It’s just a bit messy. Not opening with the regular cast might work fine in the eventual trade, but in a single issue, it doesn’t work. I even spent the first half of the comic wondering if Lewis and Clark had died off page since the last story arc, which doesn’t seem historically possible but there’s not a timeline to explain the comic opens in a flashback.

Maybe I just don’t care about Manifest Destiny doing a Sasquatch story line. Dingess does have a way of accelerating to a good place. Hopefully this arc is just warming up.

Dingess takes Manifest Destiny somewhere new and unpleasant. Even though he’s dealt with the unpleasantness of the characters before, this issue–the last in the second “volume” of Destiny–forces the reader’s complicity in that unpleasantness. It’s well-done and should’ve been predictable (Roberts butchers the final page with an exclamation point) but isn’t really. The beginning of the issue’s distractingly strong.

One almost forgotten element of Destiny has been the imaginative wildlife Lewis and Clark find on their voyage. This issue reimagines the traditional vampire as some kind of decapitating, head-stealing flying monster. It’s a neat concept, not too gory in Roberts’s art but still striking. And it makes for a great action sequence.

The subsequent scenes in Destiny remind of Return of the Jedi as Lewis and Clark and company return to the bird people village; it’s why Dingess is able to get away with a big twist. He’s letting the reader enjoy the comic. It starts with a great action sequence, why not celebrate. It’s a trick and a good one.

But Dingess has raised a lot of questions in the comic (just not in this issue) and he doesn’t get any of them answered. They’re starting to get annoying. Otherwise though, it’s just about the best issue of Manifest Destiny yet. 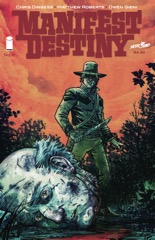 It’s almost as though Dingess is refusing to do a full story in the issue. The Sacagawea subplot, which takes up a scene–with flashback–is more complete than the main plot of the issue, with the landing party waiting to see if the blue bird person and one of the humans can make beat the monster. It’s a talking heads book, just with everyone talking about what the reader gets to see for him or herself when Dingess takes the action to the bird person and the human.

Manifest Destiny is not a story with a strong supporting cast. Dingess rarely deals with the supporting cast, which is enormous. And they aren’t particularly distinctive. Even though Roberts goes out of his way to make some visually distinctive… there are like five or six memorable people here, no more. So a talking heads book with random people talking.

The hard cliffhanger will undoubtedly get resolved quickly next issue and that issue will then have its own weak, hard cliffhanger. Dingess doesn’t let the reader enjoy the book, which is unfortunate. He’s too manipulative when he doesn’t need to be. It almost feels desperate that this point.

Talk about not much of an issue… Dingess’s pacing never impresses on Manifest Destiny but I think he might have set a new record for himself.

The comic has five or six scenes–plus a flashback–and reads in just a few minutes. The most interesting part has to be the Sacagawea sequence, which has the flashback to her youth when she starts the warrior’s path (to fend off the white man), and just shows how wasted she’s been in the comic. It’s like Dingess has been saving her for something awesome from the second issue but it’s gotten to the point there’s no way there can be enough pay off.

As always, it’s an amusing enough read and the art is spot on. Something about the content makes me not want to give up on Manifest Destiny having real potential but every issue convinces me I need to adjust my expectations.

Swierczynski takes a peculiar approach to dealing with Bloodshot’s side of the final Harbinger Wars issue. He makes it as lame as humanly possible.

It’s actually not even Bloodshot’s issue, it’s his sidekick Kara’s issue and his sidekick Kara hasn’t had much presence during the crossover event. She’s his voice of reason, not much else. Babysitter for the kids too.

Speaking of the kids, after spending a couple issues establishing them, Swierczynski dumps them to instead focus on really bad dream sequences. They’re an afterthought to the issue. Valiant must have really wanted to do a crossover special, but by not doing it straightforward, these issues are weak.

The art’s also got problems. Kitson’s has three inkers (himself included) and each of them makes the finished art look different.

It’s a bad issue and left me wondering why anyone would ever want to read another one. It’s rough and pointless.