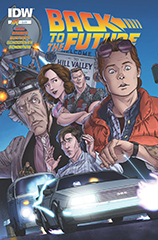 It’s been less than a month since Back to the Future Day and now we are all, like David Byrne sang in “The Book I Read,” living in the future. The Back to the Future book I read marks a personal point of no return for Back to the Future fandom which I didn’t know I had; the moment the train finally jumps the holographic Jaws 19 shark right into Clayton Ravine. This isn’t a terrible comic, merely “meh”, but that mediocrity forces the question to even the most strident BTTF fan: when is it all enough?

With “(x) years until hoverboards” jokes stale forevermore and the first film’s 30th anniversary also in the DeLorean rearview, subsequent Back to the Future revivals are going to feel pretty redundant when fans have already been treated so well by the nostalgia factory of modern pop culture. In the immediate and intervening years after Part III  there was the cartoon spinoff, the Universal Studios ride, exhaustively spiffed-up DVD and Blu-Ray re-releases, frequent parodies and homages, and new official merchandise virtually every year since 1991. Fans who waited for some type of Back to the Future Part IV more or less got their wish with a very well designed adventure game by Telltale Games in 2010, for which Christopher Lloyd voiced Doc Brown and Thomas F. Wilson recently recorded Biff’s dialogue for the re-release. At some point, insisting on yet more celebrations and revivals of these characters starts to come off as obsessive and greedy. Ultimately there’s just not all that much depth to be plumbed with these characters. Marty McFly isn’t exactly Hamlet, Prince of Denmark, Oedipal complexities notwithstanding.

The trilogy’s co-writer Bob Gale has been the guiding hand behind BTTF’s continued vitality, serving as story consultant on the cartoon, the adventure game and now (unsurprisingly) this four-part mini-series comic, all the while giving interviews to anyone who’s ever asked about the continued vitality of BTTF. On the last page before the ads he writes an editorial about his goals for the book, basically stating that since the franchise has already spun out maximum mileage on alternate timeline tomfoolery, this comic could best be utilized to tell new backstories about our beloved Doc and Marty. Prequels! They’re like sequels, only more unnecessary! He’s mostly right to acknowledge that people loved the movies because of the characters, but let’s get real, there’s only two types of Back to the Future fans. There’s people who like the quirky, magical love story of the first one and also have some affection for the sweet, sincere love story of the third, and then there’s people who like screaming UNLESS YOU’VE GOT POW-AHHH!!! and seeing Thomas F. Wilson play seven different versions of the same hilarious asshole. Everything Back to the Future related since the third movie has catered to the latter, partially because it’s the bigger audience but pragmatically because Crispin Glover and Lea Thompson are more expendable. Just ask Jeffrey Weissman.

Issue one of Back to the Future: The IDW Comic launches two storylines. One is Doc telling Clara, Jules and Verne flashback stories about stuff that happened back in the future – in this installment, how he met Marty. In the other, we join Doc circa 1943 apparently being recruited for The Manhattan Project by Robert Oppenheimer. They both read like middling fan fiction, which is really, really bad for stories conceived and partially co-scripted by the series’ original co-author. The biggest problem may be that the trilogy’s appeal is so intractable from its great filmmaking; the excellent cast well directed in a clockwork story seamlessly rendered with expert photography, editing and music. I turn the pages of this book trying to hear the actor’s voices speaking the lines with Alan Silvestri’s music cues behind them, but it just isn’t happening. Like licensed-property video games, comic books have come a long way, but the less spectacle in the franchise the harder the translation. Not that Back to the Future isn’t closer to Star Wars than Crimes and Misdemeanors, but without any time travel in the story, it quickly becomes obvious that we had already had all the facts we needed about Doc and Marty before they started their adventures.

The art on the second story is by Dan Schoening, one of IDW’s top talents who does routinely high quality work on some of their other licensed books like Ghostbusters. His character’s faces are cartoonish but solidly constructed, and set atop realistically proportioned bodies, which is an odd mix when Oppenheimer shows up. His backgrounds are well detailed, which makes the 1940s period setting convincing – Doc’s messy apartment, the Caltech campus, it all looks terrific, as do Luis Antonio Delgado’s colors. But it’s only 6 pages long. The 14 page opening feature story about young Marty breaking into Doc’s garage to steal something for Needles, and then getting offered a job…eh, the art by Brent Schoonover is just as underwhelming as the plot, and next to Schoening’s it’s kind of embarrassing. Kelly Fitzpatrick’s colors aren’t great either, everything is unnaturally primary or fluorescent. It manages to be garish and boring at the same time.

The back cover of Back to the Future is an ad for Back to the Future: The Card Game. An equally superfluous product, it may still be more inspired than this comic. At this point, Bob Gale should hang up the Flux Capacitor and instead redirect his efforts towards raising some long-overdue attention for his and Zemeckis’ abandoned children, Used Cars and I Wanna Hold Your Hand.