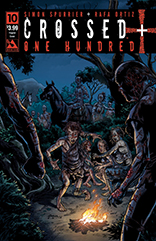 It took me two readings of this issue to realize why it feels like the shortest in the series thus far: terse dialogue between two peoples, the Crossed and the non, is made twice as terse by the rules of Alan Moore’s debilitated future English. Nearly half the pages are an excruciatingly tense standoff between Future and the camp she and her exploratory party stumbled upon, and new info gleaned about the Salt-Crossed is kept in line with Moore & Spurrier’s highly disciplined rationing of revelations across the second arc. Spurrier’s ear for dialogue might actually be better amongst the Salt-Crossed and their sickly lower-tier classes than Future and her fellow survivalers. The introduction of uncrossed humans indoctrinated as servants to the empire of Bosol is a harrowing, barely fictionalized snapshot of how slave mentality continues to function when the slave masters are away.

The only downside to this excellent scene is that it takes so little time to read, there’s barely any story left in the remaining pages. I actually went back and counted them, thinking I’d been short-changed from the usual 22. A heavy firefight action bit in the middle section also sped up the pacing. Since it’s all in greater service of the plot rather than gratuitous pandering, however, you can’t really complain.

Of equal weight to new developments in Future’s adventures, Crossed +One Hundred now has a third artist in the fold: Rafa Ortiz, who’s apparently done prior work elsewhere in the CCU (Crossed Comics Universe.) The changeover from Fernando Heinz is a mixed bag. Though his skills aren’t equal to Gabriel Andrade’s, his character acting still strives towards a comparable level of realism rather than manga-inspired rendering. The grit is back. But man-oh-man, there are two panels that are just BLATANTLY re-used near the beginning of that confrontation sequence, abruptly jerking you right out of the moment. They actually almost mirror each other across the two-page spread, it’s kind of impossible to ignore. Not sure if that’s Avatar’s fault or his – both this and the previous issue are dated for September, what was the big rush?

Hopefully we don’t see that kind of sloppiness again. Especially since Ortiz proves himself otherwise capable throughout his debut installment, both at staging action and depicting complicated outdoor crowd scenes, as he does on the final page. Those two aspects will doubtless become more critical as the saga continues simmering to a boil.