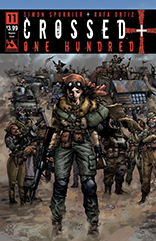 ‘Slims, churchface surprises, a refugee crisis with possible in-filled-traitors. Crossed +100 is the most satirically relevant dystopic sci-fi of modern times that no-one is reading because it’s a comic book. A lot more will read Frank Miller’s oncoming Dark Knight III: The Master Race (myself included) which will doubtlessly contain a lot of heavy handed, big-fisted references to the state of world affairs. Alan Moore’s funhouse mirror to our clash of civilizations leads the reader to reconsider recent events – chiefly the proliferation of barbarism and resulting struggle to defend ourselves without losing human decency – through the disarmingly pulpy prism of the Crossed franchise. The clever conceit of Garth Ennis’ original story was to make the zombie apocalypse subgenre more human and therefore scarier. This spinoff’s logical next step of evolving the Crossed as an organized force of religious terrorism is so uncannily relatable and disturbing as to not only render the old George Romero films kind of quaint by comparison (which Ennis’ original run did a pretty good job of anyways) but to also dissipate any suspense within the flagship series Crossed: Badlands. No wonder Kieron Gillen’s recent arc Homo Tortor was set set in the ancient past, essentially Crossed Minus Seventy-Five Thousand.

Actually talking about issue 11 now; life amongst the survivalers has hit the tipping point where Future’s warnings can’t be ignored any longer. There’s been a back and forth between installments in seeing her go out to learn more about the Salt-Crossed’s moves, then fruitlessly reporting back her findings to Murfreesboro. This is the chapter when the situation finds its way back with her, and it’s not the attackers but the wounded who are banging at the doors. Rafa Ortiz’s sketchy, thin-lined art is wholly suited to depicting the poor and tired huddled masses, while consternation grows amongst the settled. What’s slightly off is that sometimes his character’s faces will appear rushed or haphazardly constructed in some panels, and then become amazingly, painstakingly detailed on the very next page. Halfway through the comic Si Spurrier writes a terrific dialogue between Future and Mustaqba, wherein Ortiz gives Fewch kind of a goofy “angry” face at the start. By the scene’s climax she has one of the most startlingly withered looks of desperation in the entire series so far. Despite that occasional unevenness, Ortiz turns in great work throughout on a challenging variety of scenes: refugee crowds, flashbacks to battle, another heated argument between Future and Ima’am Fajr. There’s also a mysterious and imposing new character who may or may not be another Robbie Greer / Jokemercy.

If we’re still allowed to read comic books a hundred years from now we might be studying Crossed + One Hundred, not necessarily for storytelling technique but as a record of how contemporary fears are more honestly dramatized under the mainstream radar by less genteel entertainments – horror movies, sure, but now also horror comics.