For me, Westerns have always been that convenient, handy, all purpose source of fiction that utilizes Americans utopian, noble, and utterly romantic interpretations of ourselves and our history. A uniquely North American period of time, Westerns give forth the vision of how we wish to depict ourselves, generally in the best fashion, to the rest of the world. Filled will grandiose stories featuring our self imposed spirit, they can be not only ironic, but a glimpse into to the American psyche itself.

The timing of their popularity comes in the 50’s after the Second World War, and was solidified in pop culture by films, the expanding cultural icons of television, and the handy and cheap format of the comic book.

While it could be said the best representations of the American Western themes succeeded the most where the big money was, with films by John Ford far out-lapping the rather pedestrian fare found on episodic television shows.

Comics tread a similar path, with the best of the form saved for the better paying, self copyrighted newspaper comic strips, with outstanding examples being Rick O’Shay by Stan Lynde, or The Cisco Kid, by Jose Luis Salinas. This level of craft was later supplanted by the Belgian/French series Blueberry, by Jean Michel Charlier and Jean Giraud, their mastery of the American Western period perhaps the apex of the form for me.

In 1968, while the popularity of superhero comics was hitting its peak, DC and Marvel were expanding their empires of comics publishing, adding ever more titles to compete with each other and starve off rack space from the second tier publishers. They tried a lot of odd, sometimes goofy approaches to comics, throwing lots of stuff at the walls to see what would stick. 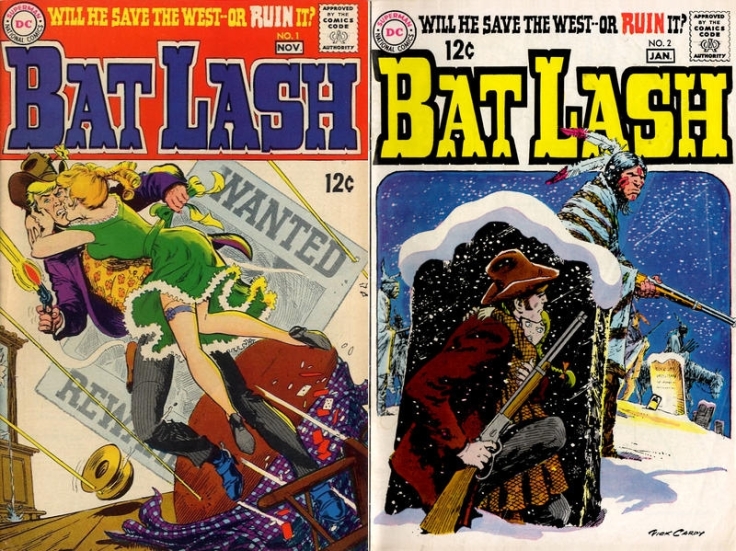 While many of the “bronze age” of American comics were still mired in commercial and semi conservative boundaries, this was a good time to grow, trying many avenues of approaches to see if there were readers of comics outside the tried and true superhero genre.

And among these oddities was Bat Lash.

Brainchild of gag writer Sergio Aragones (of the Mad magazine border cartoon fame), scripter Denny O’Neil (whose English and command of dialects was better than Aragones), and house artist Nick Cardy (whose art style didn’t need to change no matter what he was drawing), came yet another attempt to revisit the Western comic book.

Bat Lash, neither fish nor fowl of the typical Western epic and characters, brought a new game to it. While most American Western comics were visually flat and dull as dirt with leads and stories to match, Bat Lash always gave his cowboy a chance to shine, utilizing the typical attributes of the old west, yet adding some spice to it. Bat Lash was a handsome devil, he had an unerring direction towards the ladies, providing a continuous weak point for his goals, as well as being a bit of a selfish cad. As much as he liked the females, Bat Lash never prioritized them over the creature comforts of money and the opportunity to move on to the next one. In fairness to the apparent misogyny here, it can be said that most of the females depicted had the same attitude towards Bat, moving on once his usefulness to them was over with.

The world of Bat Lash is populated with a stereotypical cast, but one used effectively in relation to the lead, who was selfish in the extreme, yet highly appreciative of beautiful women and a gourmet meal. While demonstrating a typical Western drawl, he also possessed a vocabulary far beyond the yoklesque townies.

First published in an issue of DC’s anthology title Showcase, he then went on to a short lived seven issue series, each one a complete tale, but giving clues about Bat and his history along the way. Aragones provides great plots as only a lover of the Western genre can, O’Neil flourishes it with dialogue thats genuine and unique to each character, and Nick Cardy’s art perfectly compliments the proceedings, utilizing a messy brush that depicts the dirtiness of the old west, but also using fine pen lines to soften Bats features and give the women a delicate sweetness that put Bat Lash’s weakness on constant display.

Another feature in this series that gave it spice was its constant dedication to humor, an almost non existent entity in Westerns, at least on this level. Never quite taking itself too seriously, yet also providing grit in the realistic manner of how life could be cheap and over soon. It balanced the inevitable violence of the drama with a warm sense of humor that smoothed out the edges and make it an entertaining, positive read.

While not quite on the aesthetic level of Blueberry, this is one commercial comic book with a sense of identity in its hands that was consistent throughout. It’s never overly serious, yet always fully involved in its need to tell a story compellingly. You can’t accuse it of being a work of high art, but Bat Lash is certainly a work of high craft. Lovers of Westerns will recognize all the familiar elements here, mixed with added ingredients that provide fresh zest for the meal, as Bat Lash would surely appreciate.

Of the eight issues produced, my faves were issue two with Bat as a reluctant father figure, along with some of the best art found in a commercial comic; issue five, with a mirror themed antagonist comically named and depicted as Sergio Aragones with double crosses supreme, and the sixth issue, featuring none of the usual humor in a story that relates how Bat Lash come into being, with an ever present sadness that’s absent in the rest.

Perhaps the best thing about Bat Lash is that you really don’t have to have a soft spot for Westerns to enjoy it. But while its execution in style and craft overwhelm any need to adhere to a genre formula, it instead relishes in its submersion and loves it.