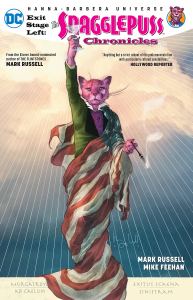 When considering indie comics, the unexpected is always hopefully expected. When given few constraints, indies can explore paths unthinkable to the person next to you; I guess that’s why they call it art.

But when considering mainstream commercial comics potential, there’s not a lot a writer/artist can work with. The main goal of acceptance with widespread success along with the added baggage of a wholly already defined concept can curtail even the cleverest of minds. Really, how many new Batman stories can be there to tell after 75 years? The best of commercial writers are lucky and skilled enough to surf the demands of the publisher’s needs, yet bring something extra to the table unique to their sensibilities. Mark Russell seems to respond well to this challenge, taking a simplistic concept and giving it more complex textures.

In the relatively short period of time Russell has worked for DC, he has invigorated not only a forty plus year old property –Prez, the story of America’s first teenage president, but also taken the horns on DC’s recent push of their stable of Hanna Barbera cartoon properties as well. His ridiculous amount of success with the Flintstones mini series (with artist Steven Pugh), demonstrated not only could he keep Fred and his cohorts interesting, he could also infuse them with a modern sensibility while examining society, incorporating the animated cave man’s aesthetics along with an updated look at todays foibles. Not only did these provide more entertainment than a hundred superhero comics, but more to the point, took a commercial assignment with highly defined limits and turned it into something fresh, new, and original for today’s readers.

Whether due to this success or just good luck, Russell grabs some more work from DC on their continued push of the HB cartoon characters with Snagglepuss, a character far down the line in terms of popularity from Fred Flintstone. Much to DC’s credit, they gave Russell incredible room to stretch his legs here, reimagining SP (Snagglepuss) as the famous American playwright Tennessee Williams, his struggles surviving in the foreground of 1950’s government investigations of un-American activities to punish him not only for his unorthodox approach towards his art, but using his homosexuality as a tool against him in the public eye.

So how to take this seriously because Tennessee Williams is drawn as an upright pink feline cartoon character? Well, Russell concocts a solution of cartoon animals coexistence with normal “human” looking people, as per demands of the necessities of the comic, with a preconditioned acceptance on our part to go along with it. While I think their contrasts are a bit jarring to be fully comfortable with, I can’t deny Russell’s success in portraying his story in such a compelling manner that it easily smooths out the rough spots of such acceptance, and keeps us fully on track with the narrative, making me want to pursue it to its conclusion. He is also able to seamlessly weave in many real life people (along with other Hanna Barbera characters) into actual historical events, giving the simplistic cartoon characters a sympathetic weight formerly unimaginable.

Artist Mike Feehan is to be credited with a disciplined approach in depicting this shared animated/real life universe, carefully keeping the cast distinct from one another and constantly identifiable. Colorist Paul Mounts brings his usual bright, garish approach to his pages, but here in this “animated” universe, his palette is much more comfortable in its surroundings, adding a visual layer of bouncy electric life to the proceedings.

Here we have quite the successful balancing act, where a writer gives the publisher the goal of a favorable commercial tie in comic, but also a controversial tale, rife not only with convincing cartoon characters, but also a well researched telling of important current history along with a biscuits worth of social vetting and political examination-whew! Sadly, the comics inevitable rough ending (it is based on Williams, after all), is countered by the solemn acceptance of it’s cast, with the promise good things can follow. Which is pretty close to how it generally works in real life. Quite the feast indeed for a comic named Exit Stage Left: The Snagglepuss Chronicles.

Russell continues to impress here, with all three of his first forays into commercial comics writing must reads against all odds of them being so. May he have many more.